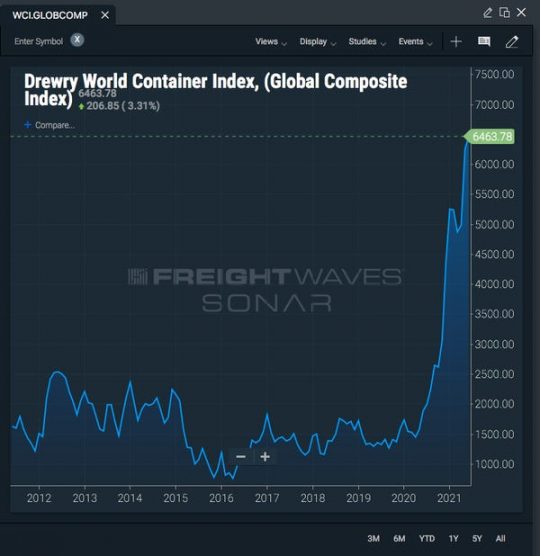 The chart shown above is the price of a shipping container over time. Costs are about four times what they were in 2020. An article at Business Insider highlighted some of the reasons why, and also how it won’t be an easy problem to fix.

It should be no surprise that this starts with the pandemic. In early 2020 as COVID-19 was spreading around the globe, there was an understandable concern that sales would plummet, and that there would be much lower demand for ocean freight.

As a result, carriers started to “blank,” or cancel, their sailings. One major shipping alliance announced cutbacks of up to 22% on voyages between Asia and Europe during the spring of 2020. Between Asia and North America, carriers slashed some 20% of capacity.

For some goods, sales did decline, but in a bunch of cases sales went way up (home workout equipment). And now that parts of the world are opening up again, and central banks and governments work to stimulate their economies, there hasn’t been nearly as big a slowdown in sales as was feared. Because of this, there aren’t nearly enough ships, longshoremen etc. to handle the capacity.

During the first half of 2020, data from the Pacific Merchant Shipping Association showed under 5% of shipments had a dwell time — the time a ship spends at a port rather than at sea — greater than five days. It steadily increased throughout the year. And from October through December of that year, around a quarter of ships were waiting more than five days.

Not only that, but something as simple but essential as a shortage of actual containers is leading to issues.

US exports have not kept up with imports from China, our largest trans-Pacific trading partner. According to FreightWaves SONAR data, import volume from China via ocean shipping is up 54% year-over-year. Exports have only ticked up by 4.4%. That means lots of containers are leaving Asia, but not enough have been returning there.

The crudeness and simplicity of trade logistics sometimes really reveal themselves, and this is a great example. Global trade has worked itself such that the amount of containers in flux are well balanced between inbound and outbound shipments, and a huge imbalance means there just aren’t enough boxes to put stuff in. It’s a seemingly simple problem, but a pretty big impediment.

Put all these issues together and it’s costing businesses a lot if they are going to continue to bring in their goods. “Nike usually [pays] $2,000 for a 40-foot container full of sneakers. Now, that container might be more around $15,000 to $20,000.”

This problem isn’t going away soon. All these delays and issues are problems in themselves, but they also beget more delays.

A ship that’s unloaded two weeks late in Los Angeles is also going to be two weeks late when it arrives back in, say, Chittagong, Bangladesh to load up on IKEA furniture. The ship before that may have been two weeks late, too, so the carrier might just cancel the ship IKEA was expecting space on, Sundboell said. Then IKEA will have to scramble for another way to move your nightstand — and potentially every order they had after that, which will now be pushed down the road.

The Business Insider article covers some other great info on container shipping, and the trends over time, so if you want to get the whole story on the pandemic effects, and also a quick primer on maritime logistics, check out the article here!

Comments Off on Global shipping still hasn’t righted itself #makerbusiness