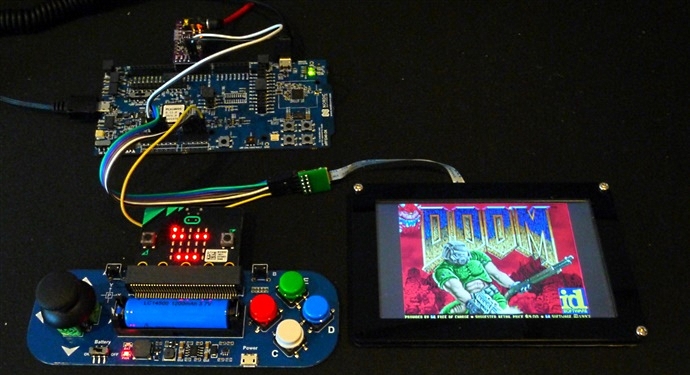 During the development of nRF5340 – a chip that may power your next headphones or gaming mouse – an important question came up: can it run the classic game Doom? A fully functional version of the game, with little to no compromises?

To run smoothly, Doom (in the day) required an Intel 486 processor running at 66MHz. The application processor of the nRF5340 can run at 128MHz, the multiplier is single-cycle and access to most of RAM and NVM is single-cycle (with cache enabled). So there should be more than enough processing power. But Doom required 8MB of RAM. The nRF5340 application core has only 512kB of internal RAM.

The team at Nordic took up the challenge.

Now we had to get the game to fit in less than 512kB of RAM. The lowest hanging fruit was to move data from RAM to flash NVM. In various parts of the game there are tables containing static information.

We just mark the data as “const” and the compiler takes care of keeping the data in flash memory. This memory can be accessed relatively quickly, especially with the cache enabled, so it shouldn’t affect performance.

To maximize the number of variables that could be constant, we removed the ability to configure various settings in the game, such as video resolution, key mappings and sound settings. Since we’re locking the video resolution to the maximum supported by the game, we could also pre-generate a few lookup tables that depend on this resolution, and make this data constant as well.

The original Doom source code is heavily influenced by being more CPU-constrained than memory constrained. In several cases, computations are pre-calculated and stored in lookup tables. Since the nRF5340 is more RAM constrained than CPU constrained, this optimization can in some cases be reversed.

You can see an older demo video below and a newer one with build details on the post here.

Comments Off on Running Doom on nRF5340 microcontroller #Doom @NordicTweete