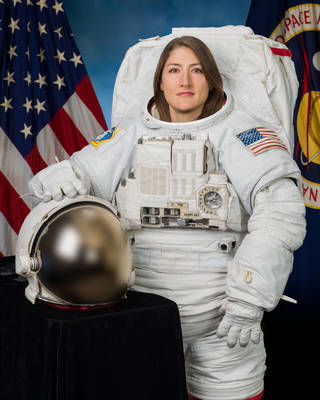 Christina Hammock Koch is a NASA astronaut and engineer. Working with NASA since 2001, she most recently served as flight engineer on the International Space Station for Expedition 59, 60 and 61.

Koch’s career prior to becoming an Astronaut spanned two general areas: space science instrument development and remote scientific field engineering. Her career began as an Electrical Engineer at the NASA Goddard Space Flight Center (GSFC) Laboratory for High Energy Astrophysics, where she contributed to scientific instruments on several NASA space science missions. Koch then became a Research Associate in the United States Antarctic Program from 2004 to 2007. This included a yearlong stay with a winter-over at the Admunsen-Scott South Pole Station and a season at Palmer Station. While in this role, she served as a member of the Firefighting and Search and Rescue Teams. From 2007 to 2009, Koch returned to space science instrument development as an Electrical Engineer at the Johns Hopkins University Applied Physics Laboratory’s Space Department. She contributed to instruments studying radiation for NASA missions, including Juno and the Van Allen Probes. In 2010, Koch returned to remote scientific field work with tours including Palmer Station in Antarctica and multiple winter seasons at Summit Station in Greenland. In 2012, Koch continued work at remote scientific bases with the National Oceanic and Atmospheric Administration (NOAA). She served as a Field Engineer at NOAA’s Global Monitoring Division Baseline Observatory in Utqiagvik, Alaska and then as Station Chief of the American Samoa Observatory. Throughout her career, she was involved in in technical instructing, volunteer tutoring and educational outreach.