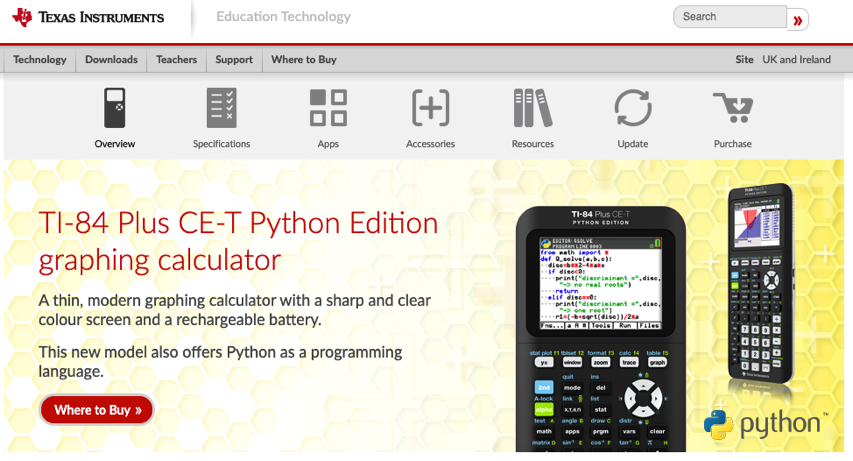 In May of 2021 we saw that there was a fork of CircuitPython reported to be running on the new TI-84 Plus CE Python Graphing Calculator by Texas Instruments and we had to get one (and did!). We reached out to the folks at TI Education / TI Calculators and asked if we could send over some questions to their team(s) and they said YES, here they are! Special thanks to Jennifer Kass, Global Marketing Communications and Web Manager for Education Technology at Texas Instruments and Phoebe Francis at GOLIN. It’s amazing to see all the calculators out there that support Python as core feature, and specifically we’re thrilled to see a fork of CircuitPython, on a physical chip in the TI-84!

Adafruit: For the folks out there that do not know about TI’s calculators, what are the TI-83 and TI-84? How and where are they used? How many are used in schools, by students, etc. USA and worldwide? Standardized testing organizations have approved the TI-84 Plus; what’s involved with that? (looks like the TI-84 can be utilized on the PSAT®, SAT® and ACT® college entrance exams, as well as IB® Diploma Programme and AP® exams that allow or require a graphing calculator).

More than 90 million graphing calculators have been sold worldwide since 1990. TI technology prepares students for success on their high-stakes exams. Testing providers determine which technology they allow on their exam, and teachers and students can see which TI technology is accepted here.

Adafruit: It looks like all the major calculator makers are adding Python as a programming language, including TI; why is that?

Coding skills are a basic literacy these days, and introducing students to one of the fastest-growing programming languages in the world gives students knowledge they can apply to future STEM careers. By adding Python to our TI-83 Premium CE, TI-84 Plus CE and TI-Nspire CX II graphing calculators, students can learn to program using the same dedicated, distraction-free tool they are already familiar with from math and science classes.

The main Python app and the implementation are identical with both calculators.

Adafruit: What are the new and best features of the upcoming TI-84 Plus CE Python graphing calculator?

Adafruit: The TI-84 Plus CE Python graphing calculator uses a fork of CircuitPython; why was CircuitPython selected?

CircuitPython meets our need for Python functionality in a constrained hardware environment.

Adafruit: Is there any chance of TI-84 Plus CE Python graphing calculator forked-code changes being added upstream?

We have filed bugs and provided test cases to MicroPython on some of our changes.

Adafruit: What are the accessories specific to the TI-84 Plus CE Python graphing calculator, and how can they be used with Python?

The TI-84 Plus CE Python graphing calculator can be used with Vernier sensors, as well as with TI-Innovator Hub and TI-Rover. The TI-Innovator Hub is a programmable microcontroller accessory designed to introduce students to coding and physical computing from their calculator. The TI-Rover is a programmable robotic vehicle that can be used in math and science classes, as well as in STEM clubs to provide an easy on-ramp to robotics.

The software for the calculator includes Python modules to interact with TI-Innovator Hub and TI-Rover.

We also have a Python module that enables programming the BBC micro:bit from the calculator.

The TI-84 Plus CE Python graphing calculator runs on a co-processor. 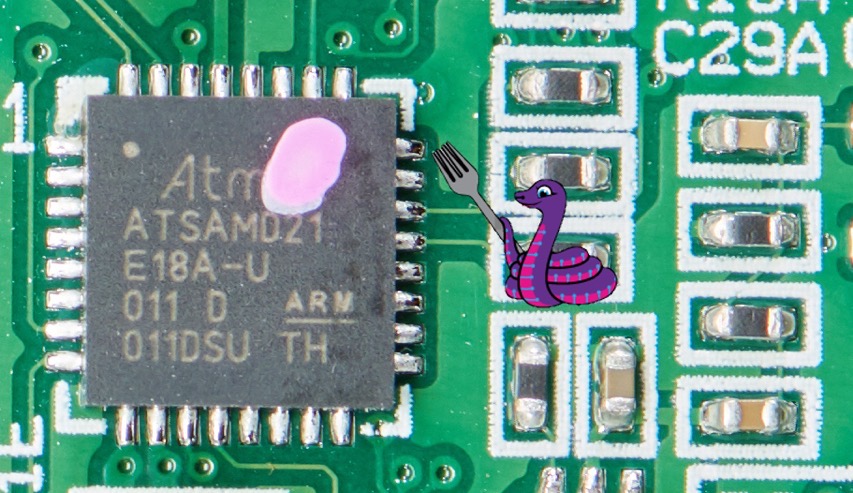 After confirming this, we took apart the calculator and there is! Photo, and larger. The fork of CircuitPython is running on a ATMEL (Microchip) ATSAMD21E18 (same as our GEMMA M0, TRINKET M0, and many TRINKEYs).

Adafruit: Are there additional or possible future TI products which may use Python?

Preparing students for the future is important to us, so we are always exploring new ways to innovate our technology for the classroom. We continue listening to teachers and partner with them to bring new Python and STEM opportunities to their schools.