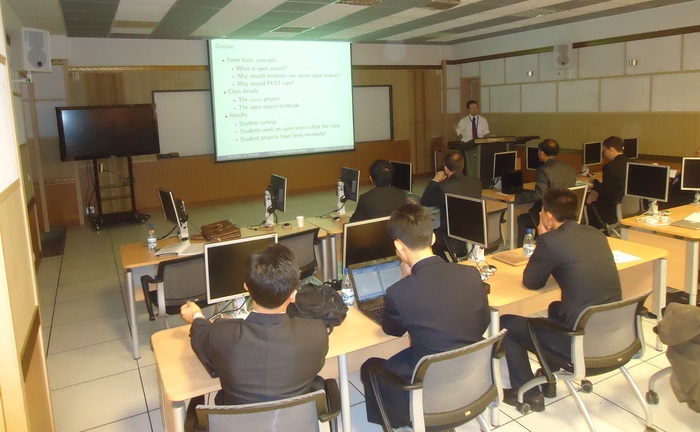 In 2016, Mike Izbicki went to North Korea to teach a class of masters students how to contribute to open source software.

As part of the class, students were required to submit patches to a project of their choosing, and I want to share the stories of how two of these patches landed into the popular machine learning libraries mlpack and vowpal wabbit. I believe these examples highlight how academic collaboration between North Koreans and Americans can benefit ordinary citizens of both countries and improve diplomatic relations.

AFAIK, the patches submitted for this class were the first ever open source contributions to come from North Korea; unfortunately, they were also the last.

President Biden has recently announced his policy of “practical diplomacy” with North Korea. But the details of this policy are not yet clear, and the travel ban remains in effect. As long as this policy remains in effect, I and other American instructors will not be able to help North Koreans contribute to open source. So Americans will not benefit from North Koreans fixing bugs in our code, and the science diplomacy that effectively reduced tensions between the US and Soviet Union cannot be used as a tool to reduce tensions between the US and North Korea.