Inside a GE thin-film paperweight from the 1960s #History @kenshirriff

In the early 1960s, General Electric developed a technology called thin-film electronics. These circuits were built from thin films of material, much more compact than individual components. They were for weight-sensitive applications such as satellites and military equipment.

Ken Shirriff was given this item to examine it’s workings. He reverse-engineered the “Space Age Electronics” inside  explains how it works in a detailed blog post here.

The most visible part of the paperweight is the thin-film module. The idea behind thin film is to build resistors and capacitors as thin layers on a substrate, rather than using individual components. Resistors are formed from thin strips of resistive material, the vertical reddish-brown lines on the module’s surface. For higher resistance, these lines zig-zag back and forth. Capacitors are formed from two thin layers of metal (the plates), separated by an insulating dielectric material.

Thin-film transistors were not commercially practical in the 1960s, so the module has tiny discrete transistors and diodes mounted on top, connected by golden wires. (This must have been expensive to manufacture.)

Read more and see detailed pictures in the post here. 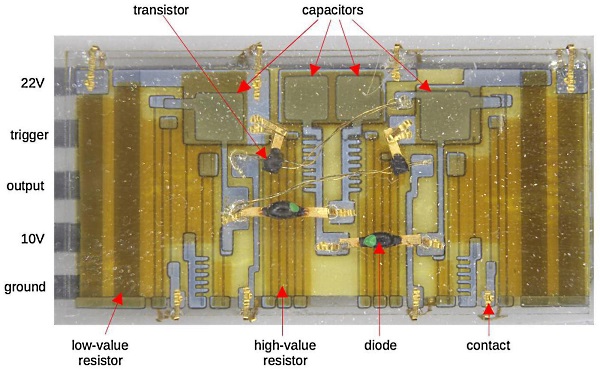