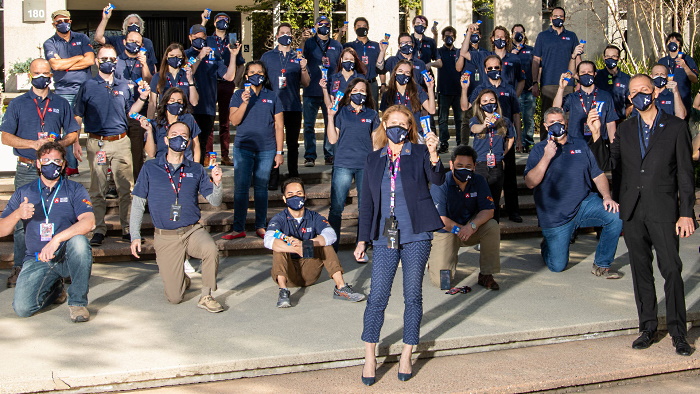 Before NASA’s Mars Perseverance rover landed on Mars on Feb. 18, 2021, the entry, descent, and landing team posed at the agency’s Jet Propulsion Laboratory in Southern California with individual bags of traditional “lucky peanuts.” Eating peanuts before major mission events is a longstanding tradition at JPL.

Good-luck peanuts made their first appearance at the Space Flight Operations Facility at NASA’s Jet Propulsion Laboratory’s in 1964 during the Ranger 7 mission. JPL had six failures prior to this effort, so the pressure was on to succeed.

The Ranger 7 launch day arrived and with it came the peanuts.

“I thought passing out peanuts might take some of the edge off the anxiety in the mission operations room,” said Dick Wallace, mission trajectory engineer on the Ranger team. “The rest is history.”

Ranger 7 performed flawlessly, as did its successors, Ranger 8 and 9. They returned pictures and helped pick the landing sites for the Apollo moon program. The peanuts have showed up on informal countdown checklists for most every launch since then.

On a few occasions, the peanuts didn’t make it for launch day. In once case, the spacecraft was lost soon after launch. In another, the launch was delayed for 40 days, and only took place after the lucky peanuts were delivered to the mission team.

Up until the Voyager mission, the peanuts showed up only at launch. Nowadays, they are often seen in mission control facilities during critical mission stages such as orbit insertions, flybys and landings, or any other event of high anxiety or risk.