NASA is Funding a Hunt for Alien Megastructures 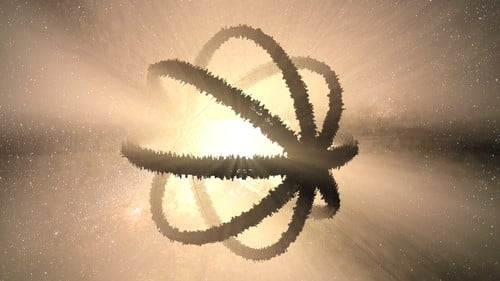 The truth is, we know what the movie 2001 is about. We learn in the first ten minutes or so, when those sapiens discover an alien artifact. 2001 is about the encounter with non-human intelligence in the form of both HAL and the makers of the Monolith. The only reason we don’t see the aliens in 2001 is because director Stanley Kubrick was unsatisfied with all of the attempts of his otherwise brilliant design team to depict an alien. Like the ghosts in The Shining, Kubrick wanted the aliens to be as clear and real and perfectly in-focus as everything else in every single one of his movies. If the depiction of aliens in 2001 couldn’t be both clear and properly alien, then he wouldn’t show them at all. But that’s the problem. We can’t imagine aliens. It’s as consciousness breaking as any moment of cosmic horror — or cosmic revelation.

That’s part of why 2001 is so effective. It depicts aliens more than any other film exactly because it’s trying to evoke alien-ness rather than show an alien.

Which is why it’s so hard to think about the search for extraterrestrial life, on any scale. It breaks the brain. But that won’t stop us. It sure won’t stop NASA. Here’s more from MOTHERBOARD:

Since the end of 2019, NASA has awarded four grants to fund searching for technosignatures. In November 2020, NASA awarded a grant to Ann Marie Cody of the NASA Ames Research Center and Croft to survey the whole sky for anomalous objects that transit across stars. It is possible, however uncertain, that they and their collaborators will find artificial alien megastructures.

Cody studies natural causes of dimming, which make stars vary in brightness. These can range from objects in orbit, like exoplanets or exocomets, to sources inherent to the star, like sun spots. In general, dimming is a key investigative tool for discovering new exoplanets or other objects that “transit,” or pass in front of, stars. But dimming should also provide a way to identify the presence of alien megastructures, which might block out starlight in transit. With their collaborators, the pair will create the first large scale survey for transiting technosignatures. It is work that is pioneering on both a technical and organizational level.

Comments Off on NASA is Funding a Hunt for Alien Megastructures