Texas Instruments writes about Charles “Bob” Cook, who was assigned by Jack Kilby (inventor of the integrated circuit – IC) to lead development of the first ICs to ever orbit the Earth – and set the foundation for future space electronics.

NASA had its sights set on the moon with its pending manned Apollo missions. To be successful, it would need to increase the computing power and reduce the weight of its modules. As a result, the space agency was already in the process of swapping circuits of discrete transistors for integrated circuits. Jack previously supplied NASA with the first commercially available IC – the TI SN502 – at a cost of about $450. But NASA needed an alternative that provided more power and more speed in the same amount of space.

Jack’s challenge: design a line of digital logic ICs to replace the SN502, but with 10 times the speed and one-tenth the power requirements to help NASA reach its goal of increased computer power and reduced weight. And NASA wanted it in 10 months.

Bob worked sunrise to sunset six days a week – plus after church on Sundays – to meet the deadline. He went to the production line and selected each wafer carefully to get the best possible yield. About 50% of the chips worked, so he examined the rejects individually with tweezers to figure out what adjustments would improve the yield.

“We did two things we had never done before,” said Bob, now 88 years old and living in West Palm Beach, Fla. “We found a way to put two transistors on a chip and we put oxide on the surface of the silicon to allow us to put conductors on it to connect the transistors.” 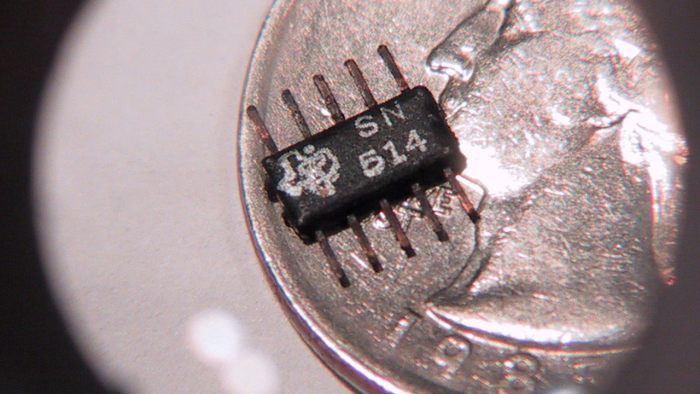 With that, the TI Series 51 family of integrated circuits was born. The Series 51 – also featured on the November 1961 cover of Fortune magazine – was a set of six digital logic circuits based on resistor-capacitor-transistor technology with lower power and a small, flat package.

The work done on Series 51 laid the foundation for several products that Texas Instruments sells today and ultimately was a precursor to all IC technology that enables the digital world.

Comments Off on Developing the first ICs to orbit Earth @TXInstruments