Dancing robots, robots that read with kids, and more …

Making the rounds on the social media and more are the videos from Boston Dynamics featuring the Atlas doing some Parkour. Boston Dynamics has a “Inside the lab: How does Atlas work?” video as well. Falling down version here.

This post is about the Sony QRIO which is not around any more, but I got a chance to work the bots (2003-ish) and wanted to share some of the footage and more. Wikipedia has a bit about them too –

On January 26, 2006, on the same day as it announced its discontinuation of AIBO and other products, Sony announced that it would stop development of QRIO. Before it was cancelled, QRIO was reported to be going through numerous development, testing and scalability phases, with the intent of becoming commercially available within three or four years.

The QRIO prototypes were developed and manufactured by Sony Intelligence Dynamics Laboratory, Inc. The number of these prototypes in existence is unknown. Up to ten QRIO have been seen performing a dance routine together; this was confirmed by a Sony representative at the Museum of Science in Boston, MA on January 22, 2006. Numerous videos of this can be found on the web.

About 18 years ago I was in Japan working with Sony via the agency I was part of, Fallon. Spending time with one of the senior Sony engineers, who’s likely retired by now, made a dent on me. He said during one of the filming breaks “Torrone, make robot friend, not robot weapon / servant”, this was after we were discussing the Honda ASIMO robot that fetched papers, in contrast to the QRIO, which danced and read stories with kids. 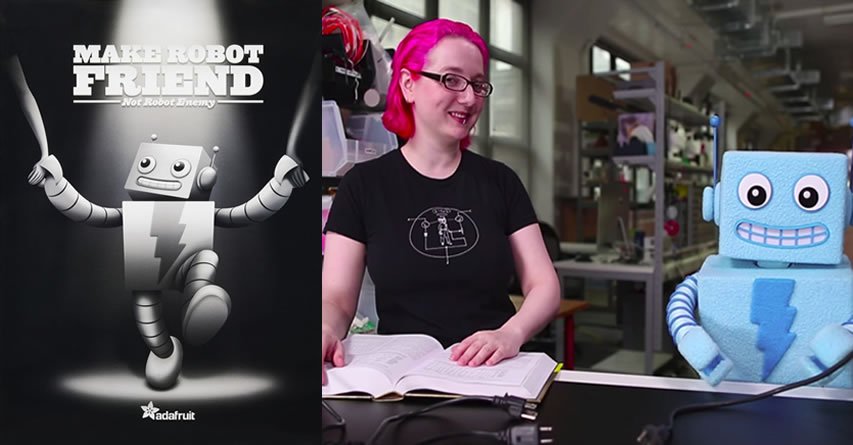 The words of wisdom were made permanent. Years later, this turned into, “Make robot friend, not robot enemy” – which happens to be a poster we have at Adafruit, and also one of the reasons we made ADABOT.

What’s needed is robot friends, ‘art bots’ and AI that has the best of us in it’s DNA (code). Not our worst and most self-impulsive behavior. The AI we make now will one day meet us. The lines of code we write, the things we ask or force it to do, will catch up with us later. We will meet these creations in one way or another eventually.

Video above of some of the QRIO footage (past post about AIBOs and QRIOs at MAKE too).

Usual disclosure: Someone on Twitter will say this is some type of paid post, or sponsored by DARPA, or something like that – it’s not in any way.

Filed under: robotics — by phillip torrone

Comments Off on Dancing robots, robots that read with kids, and more …