Whatever Happened to Boushh the Bounty Hunter? #SciFiSunday 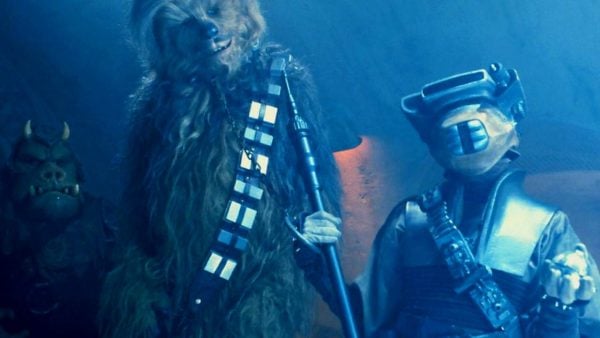 George Lucas famously gave up some up-front money to direct the original trilogy in favor of rights for sequels and merchandizing. And then he cannily set up the merchandizing to be a part of the world-building by filling every frame with characters and objects that each have their own history, and then providing that history through toys. Back before Star Wars Wiki the only way to learn the name of that yak-faced alien in the back of Jabba’s Palace (Saelt-Marae) or the “Stay on target” guy (Davin Krail) was to walk to the local Toys-R-Us and find the action figure.

One story that has yet to be told until now, is the history of the bounty hunter whose armor Princess Leia stole to con her way into Jabba’s Palace. Here’s more from SlashGear:

Boushh first appeared in Star Wars lore as the name given the previous owner of the armor Leia wears at Jabba’s Palace in Return of the Jedi. Unlike the massive amount of work Lucasfilm put into generating interest in the character Boba Fett in the years before the release of The Empire Strikes Back, little was done to explain the origin of said armor. They DID give it the name Boushh, though – as evidenced in the 1983 Kenner action figure.

Return of the Jedi was released that same year – 1983. It wasn’t until the year 1996 that we got close to hearing where Boushh lost his armor. Even then – it was just a note. The android character Guri mentioned the death of Boushh as part of a deal gone wrong: “He tried to rascal Black Sun for more credits on a delivery for which there was an agreed-upon contract. That was… unwise.”

Comments Off on Whatever Happened to Boushh the Bounty Hunter? #SciFiSunday