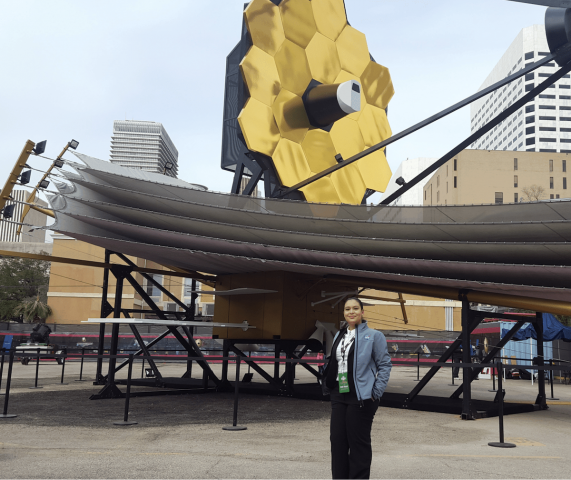 Hernandez was born in the Dominican Republic in 1991, but her family moved to Brooklyn when she was just 4 years old. Her family didn’t have much, but her mother taught her to be a strong and independent woman. In 2009, Hernandez was awarded a full, four-year ride from the National Science Foundation to attend Capitol Technology University in Laurel, Maryland. While in school, she started a Society of Women Engineers (SWE) group at her university and served as secretary and later president. She also did an internship at the NASA Goddard Space Flight Center, where she worked on the Tropical Rainfall Measuring Mission. She completed her bachelor of science degree in computer engineering in 2013.

After graduation, NASA offered Hernandez a full-time position as mission planning lead and system engineer for the Tropical Rainfall Measuring Mission. In 2014, she joined the Space Telescope Science Institute (STScI)—part of the Association of Universities for Research in Astronomy (AURA)—in Baltimore. Now a Spacecraft Engineer for JWST, Hernandez develops and tests code for the Deployment Control Subsystem. JWST is the most complicated space telescope ever designed and relies on multiple deployment events to get it ready for observations. Hernandez’s work testing command codes before launch is vital to the success of the mission.