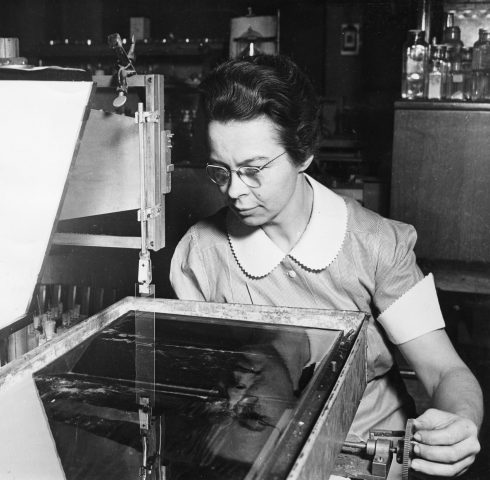 Katharine Blodgett was an engineer/scientist at the GE Research Lab who developed methods of using monomolecular coatings to improve eyeglasses, camera lenses, and more.

The invention of the ‘color gauge,’ which permits film measurement within one microinch, began with Dr. Blodgett’s discovery in December 1933 that monomolecular layers of stearic acid, each about one ten-millionth of an inch in thickness, could be successively deposited on to a plate lowered into the solution. This enabled her to construct films in a series of progressive thicknesses, of which each reflects a characteristic color in white light. Her method of depositing sheets of barium stearate on plates enables a standardized color gauge to be constructed. “Anyone who wishes to measure the thickness of a film which is only a few millionths of an inch thick,” she said, “can compare the color of his film with the series of colors in the gauge. The step on the gauge that matches his film in color will give him a measure of its thickness.”

In December 1938 GE announced that Katherine Blodgett had succeeded in developing a nonreflecting ‘invisible’ glass. Ordinary glass is visible because of the light rays which are reflected from its surface, and when a film is placed upon the glass, Dr. Blodgett discovered that a coating of forty-four layers of one-molecule-thick transparent liquid soap, of about four-millionths of an inch or one-fourth the average wave length of white light, made sheets of glass invisible. Since the reflection from the soap film neutralizes the reflection from the glass itself, the crests and troughs of the two sets of light waves cancel each other, thereby eliminating reflected light. At the same time, the soap varnish is a good conductor of light, permitting 99% of the light striking it to pass through.