Today we celebrate inventor Margaret Knight, who made assembly lines safer, and invented the idea and manufacturing method for the modern grocery bag. 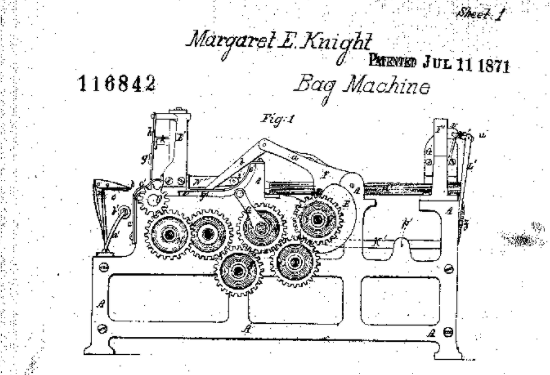 Here’s more from the Smithsonian

With only rudimentary schooling under her belt, a 12-year-old Knight joined the ranks of a riverside cotton mill in Manchester to support her widowed mother. In an unregulated, dangerous factory setting, the preteen toiled for paltry wages from before dawn until after dusk.

One of the leading causes of grievous injury at the mill, she soon observed, was the propensity of steel-tipped flying shuttles (manipulated by workers to unite the perpendicular weft and warp threads in their weaves) to come free of their looms, shooting off at high velocity with the slightest employee error.

The mechanically minded Knight set out to fix this, and before her thirteenth birthday devised an original shuttle restraint system that would soon sweep the cotton industry. At the time, she had no notion of patenting her idea, but as the years went by and she generated more and more such concepts, Knight came to see the moneymaking potential in her creativity.

At the bag company, as with most places she spent appreciable time, Knight saw opportunities for improvement. Instead of folding every paper bag by hand—the inefficient and error-prone task she was charged with—Knight wondered if she might instead be able to make them cleanly and rapidly via an automated mechanism.

“After a while,” [engineering historian Henry Petroski] writes, “she began to experiment with a machine that could feed, cut, and fold the paper automatically and, most important, form the squared bottom of the bag.” Prior to Knight’s experiments, flat-bottomed bags were considered artisanal items, and were not at all easy to come by in common life. Knight’s idea promised to democratize the user-friendly bags, ushering out the cumbersome paper cones in which groceries were formerly carried and ushering in a new era of shopping and transport convenience.