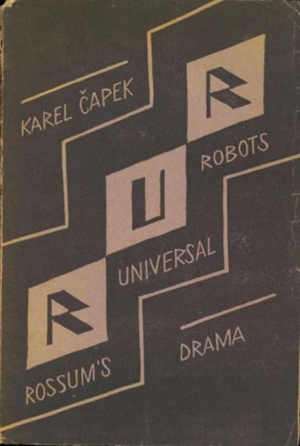 A century ago was the world premiere of R.U.R.: Rossum’s Universal Robots by Karel Čapek. That’s means it’s been a century since the word “robot” was invented. Here’s more from Centauri Dreams:

According to an interview given to a Czech newspaper more than a decade later, the true creator of the word was Karel’s brother, Josef, a talented painter and poet. While Karel could not decide what to call artificial people, Josef (who lived with him at the time) suggested the work “robot” coming from robota, meaning hard work, usually done involuntary in serfdom. A similar word, denoting labour or hard work, is present in all Slavic languages (e.g., “робота” in Ukrainian, “rabota” in Serbian and Croatian, etc.). Formally, of course, one could argue that the word was coined in 1920, when the drama was written, and Karel’s conversation with Josef took place, but the neologism began to spread only after the premiere in 1921.

R.U.R. is arguably still the most important and the best written science fiction play ever. It is far from being Čapek’s only claim to fame, however. On the contrary, he was extremely, unbelievably, fantastically prolific for a man of lifelong poor health who died at 48. He wrote a dozen novels, hundreds of short stories in all genres, a book on gardening, 5 books of letters describing various travels all over Europe, children books, literally thousands of newspaper articles, essays, vignettes, and Borges-like “apocrypha”. His novels, both realistic (Hordubal, Meteor, Ordinary Life, Life and Work of the Composer Foltýn) and SF (Krakatit, The Absolute at Large, and his most significant work, War with the Newts) are all very complex affairs, full of difficult philosophical and psychological ideas, but also mostly ironic and often spiced with Monty-Pythonesque black humor.

Comments Off on Rossum’s Universal Robots at 100