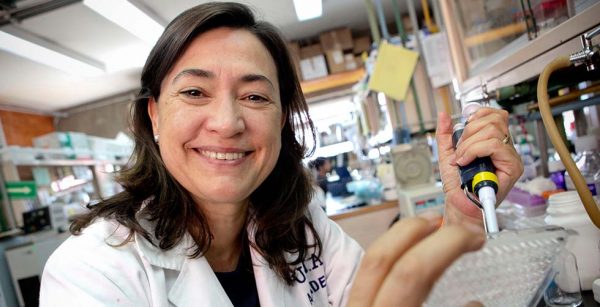 Worldwide, rotavirus is the leading cause of diarrhea in children under the age of 5 and was responsible for an estimated 215,000 deaths in this age group in 2013. According to the CDC, nearly all children in the U.S. had contracted rotavirus before the vaccination was introduced in 2006. Originally discovered in 1973, rotavirus is still studied today by Virologists like Dr. Susana López Charretón.

López was born in Mexico City in June 1957. She knew from a young age that she wanted to pursue biology. As a child, she would catch lizards and dissect them. She followed her passion to the Universidad Nacional Autónoma de México (UNAM), where she completed her bachelor’s in basic biomedical research in 1980, followed by a masters in 1983 and a PhD in 1986.

While finishing her graduate degrees, she spent a few years at the California Institute of Technology (CalTech) and a semester at the National Institute of Health (NIH) in Tokyo.

After finishing her doctorate, López became a principal investigator at the Institute of Biotechnology at UNAM, where she continues to work today.

She won the Gabino Barreda Medal from UNAM in 1988 for her postdoctoral work. In 1991, she was awarded a Fogarty Fellowship, which she took to CalTech. She spent 1998 on sabbatical at the Instituto Nacional de la Investigación in France.

In 2000, López became an International Research Scholar with the Howard Hughes Medical Institute (HHMI). HHMI is a philanthropic group that provides funding for biomedical researchers “with the potential for transformative impact.” López’s research was funded through HHMI through 2010, with two five-year funding awards.