Today we celebrate France A. Córdova, astrophysicist and administrator who was the fourteenth director of the National Science Foundation. 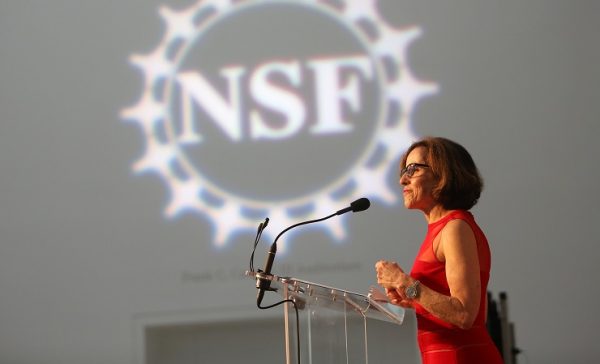 From the National Science Foundation:

The Honorable France A. Córdova is an astrophysicist and the 14th director of the National Science Foundation (NSF). Córdova was nominated to this position by the President of the United States in 2013 and subsequently confirmed by the U.S. Senate. NSF is a $8.1B independent federal agency; it is the only government agency charged with advancing all fields of scientific discovery, technological innovation, and STEM education.

Córdova has been a leader in science, engineering and education for more than three decades. She has a distinguished career in both higher education and government; her contributions in multi-spectrum research on x-ray and gamma ray sources and space-borne instrumentation have made her an internationally recognized astrophysicist.

She is president emerita of Purdue University, where she led the university to record levels of research funding, reputational rankings, and student retention and graduation rates. She focused her tenure on launching tomorrow’s leaders, translating research to innovation and meeting global challenges. She established a new College of Health and Human Sciences at Purdue, as well as a new Global Research Policy Institute, and participated in state-wide initiatives to boost public-private research collaborations.

Córdova is also chancellor emerita of the University of California, Riverside, where she was a distinguished professor of physics and astronomy and laid the foundation for a new medical school, California’s first public medical school in over 40 years, and focused on student diversity and inclusion. At the University of California, Santa Barbara, where Córdova was vice chancellor for research and professor of physics, she led a campus-wide effort to support convergence in blue-sky research areas.

Previously, Córdova served as NASA’s chief scientist, representing NASA to the larger scientific community and infusing the activities of the agency — including the International Space Station, then under construction — with the scientific goals of the broader community. She was the youngest person and first woman to serve as NASA’s chief scientist and was awarded the agency’s highest honor, the Distinguished Service Medal.