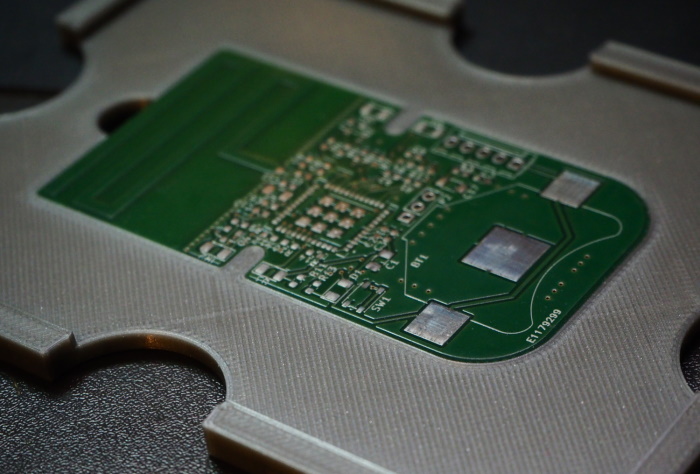 stencilframer is a Python script by Igor Brkic which takes the KiCAD PCB or Gerber file as an input and, using OpenSCAD in the background, produces STL/AMF mesh which can be sliced and 3D printed. It can also export PNG image or the actual OpenSCAD code used for the model (for further adjustments). Only dependencies for running it are Python and OpenSCAD.

When prototyping I usually order PCBs together with small, frameless stencils (usually from Eurocircuits when I’m in a rush and from seeed or JLC when I can wait few weeks). Previously, for applying solder paste to the PCB, I’ve used different arrangements of old PCBs taped to my desk and the stencil taped over all of it and all of it was quite cumbersome. For a recent project I manually designed the printed part which holds the PCB and stencil in place and it proved to be of great help. Since I have few boards to assemble and test in the upcoming weeks I decided to automate the whole process.

A Stencilframer script takes the KiCAD PCB or gerber (supported extensions are .kicad_pcb, .gbr, .gm1) file and extracts the shapes from the Edge.Cuts layer (i.e. board outline). Then it converts it into OpenSCAD polygon (list of vertices) which is extruded to get the shape of the PCB (arcs are replaced by a series of short straight lines). Based on the PCB and the stencil margins (margin between PCB edge and stencil edge can be adjusted for each side) it also creates and extrudes the shape for the stencil. A small offset (0.1mm default) is added to both shapes. Those two shapes are subtracted from the base element and some cutouts are added to simplify taking out the PCB and stencil.

See more in the article here and the code on bitbucket.