The Impact of Frank Herbert’s Dune 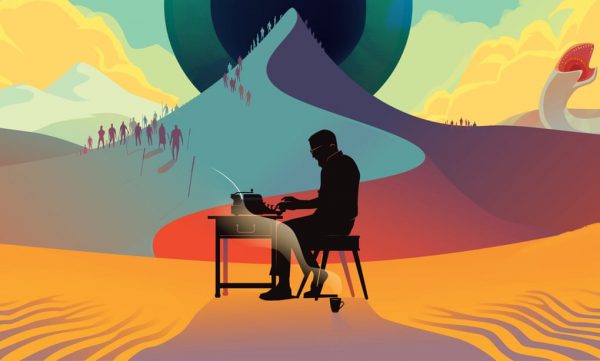 Dune was a phenomenon long before the upcoming film, and before David Lynch’s wild adaptation, and even before Alexander Jodorowsky’s ill-fated attempt. Here’s more from The Guardian:

Though in his later years he enjoyed huge success, [Frank Herbert, author of Dune], the man who dreamed of greening the desert, had mixed feelings about the future. In Dune, he has Kynes, the “First Planetologist of Arrakis” (and hero of the novel’s first draft) muse that “beyond a critical point within a finite space, freedom diminishes as numbers increase. This is as true of humans in the finite space of a planetary ecosystem as it is of gas molecules in a sealed flask. The human question is not how many can possibly survive within the system, but what kind of existence is possible for those who do survive.” Gloomy Malthusianism was much in vogue in the 1960s and 70s. In 1968 Paul Ehrlich’s The Population Bomb became a runaway bestseller, predicting mass starvation unless population growth was restricted. The flip side of the green movement’s valorisation of small scale and self-reliance is an uneasy relationship with the masses, and with the idea of economic growth more generally. Herbert’s libertarian politics reinforced this worry. In Dune, Paul knows that if the desert planet is made to bloom, it will support a larger population, and the ethic of individualism will be eroded. He himself, as he is transformed from aristocrat to messiah, loses his individuality and begins to dissolve into myth, becoming part of a Jungian collective unconscious. But perhaps Herbert would take heart from the thought that history does not appear to be teleological and some long-term plans do not take on the character of destiny. Fifty years after Dune’s publication, the US Department of Agriculture is still at work on the Oregon Dunes, rooting out European beach grass, an “invasive non‑native species”. They want to return the dune processes to their natural state.

Comments Off on The Impact of Frank Herbert’s Dune