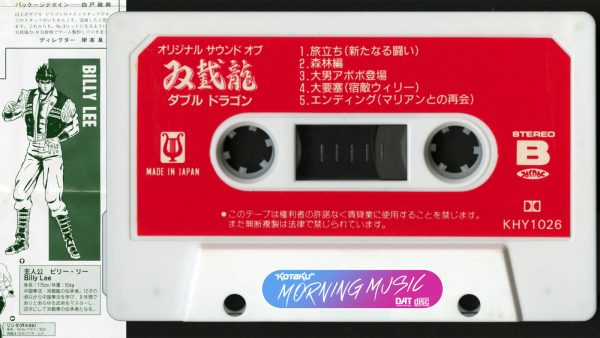 When you stepped up to an arcade game in the late 80’s, and the tinny speakers began to play whatever synth riff set the scene, it was easy to get excited. Even when the score wasn’t so great. One of the most fun arcade games of the 80’s came out with an arranged soundtrack, released on cassette. It was an instant classic. Here’s more from Kotaku:

…Double Dragon’s score, by Technos’ Yamane Kazunaka, was driving, tense, and sometimes pretty catchy. But I don’t think its original arcade incarnation did these compositions justice…. How much of that comes down to the Yamaha YM2151 audio hardware and how much is just Kazunaka’s choices is unclear, though I suspect it’s a mix of both. R-Type and Ninja Spirit both use the same chip, both sound a little rough and primitive in similar ways, but neither suffer such obviously grating instrumentation. You can audition other YM2151 games over on VGMRips.

Fortunately, Double Dragon almost immediately got an arranged soundtrack. The (very deceptively named) album Original Sound of Double Dragon – Arcade Version(VGMdb) hit in February ‘88, seven months after the game’s debut, and its arrangements are a significant improvement on every front.