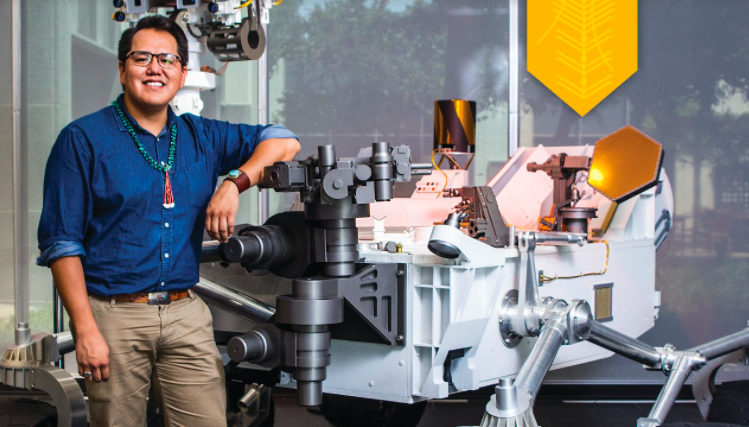 A NASA rover launched from Earth six months ago to collect rock core samples on Mars will make landing on a dry lakebed on the red planet this afternoon. The Perseverance Rover — the fifth robot NASA has launched since 1997 as part of a larger mission to understand whether life exists on Mars — has a name that holds significance for both the pandemic launch, and also for team members like Aaron Yazzie (Diné), one of just a handful of Native Americans working on the project.

The car-size Perseverance Rover will extract rock samples from Jezero Crater over the next two years. Yazzie, a mechanical engineer at the NASA Jet Propulsion Laboratory in Pasadena, Calif., told Native News Online that when a meteorite hit the planet 3.5 billion years ago, there was a lake in the crater, meaning that core rock samples are likely to hold ancient rock information.

“Because Mars and Earth are rocky, terrestrial planets, they both developed over billions of years in a similar way,” he said. “But at the same time, if we know that Mars and Earth have developed similarly over so long, then why do we look like we do, and they look different? And also, is there a possibility that life could have formed there just like life forms on Earth? It’s a very plausible question that it’s going to be really exciting to to find out the answer to.”

The $2.7 billion mission, which blasted off from Cape Canaveral, Fla., on July 30, was named by a school kid in a competition just weeks before Covid-19 shut down the nation. That namesake soon became a reality for the hundreds of employees scrambling to ready the mission.

“I can tell you, this is not what scientists usually do,” Ken Farley, Perseverance project scientist at the California Institute of Technology, said during a press conference. “Scientists do not usually perform under these kinds of circumstances.”