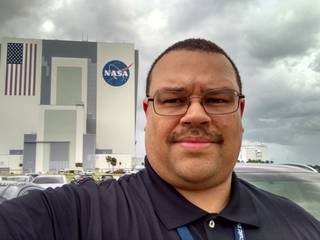 “Growing up in the Bowie, Md., area, whenever we drove by NASA’s Goddard Space Flight Center, I told my parents that I would work there someday,” recounts Proctor, who is now an associate chief at Goddard for NASA’s Electrical Engineering Division (EED).

Originally, Proctor was focused on astronomy, but during high school at an engineering exploration summer program he solved “a resistor equivalence problem that nobody else in the class had gotten [and] the instructor recommended I look at electrical engineering as a career instead.” He got a master’s in EE from Johns Hopkins University. “I started working at Tracor Systems (now part of BAE Systems) in their Standard Missile Program,” recalls Proctor. “In 2001, after three years there, an opening at Goddard became available. I applied…and I’ve been there ever since.”

Here’s more from Marcellus via NASA:

As a child, I took things apart and put them back together. When I was 16, I attended an engineering exploration summer program hosted by Morgan State University in Baltimore. It changed my life. The instructors gave us assignments in different engineering disciplines. One problem in particular was in electrical engineering, it was an exercise to calculate the equivalent resistance of a circuit. No one in the class got the answer so I asked the instructor if I could try to calculate the resistance value. I wrote my answer down and I got it right. After class, the instructors pulled me aside and recommended that I look at electrical engineering as a career field.