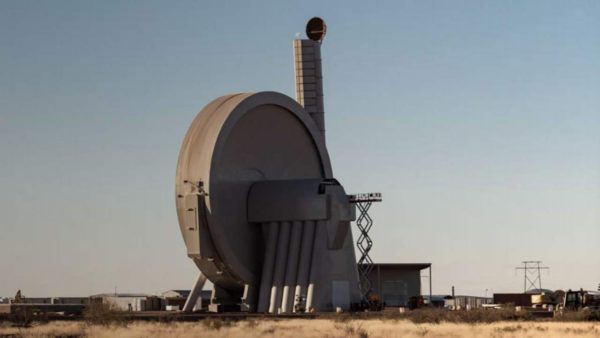 As it turns out, going into space causes a great deal of pollution. The SpinLaunch system uses kinetic energy to shoot a rocket into space — without a rocket and with zero emissions. Here’s more from SlashGear:

It uses a massive accelerator larger than the Statue of Liberty powered by an electric drive to throw payloads into orbit. SpinLaunch says its creation could reduce fuel consumption by a factor of four while costing ten times less than similar launches using traditional rockets. Another massive benefit is that the system would be able to put multiple payloads into orbit each day.

The test flight did not put the payload into orbit. The current test device is a Suborbital Accelerator featuring an upright vacuum chamber shaped like a disc and a carbon fiber tether. Together, the vacuum chamber and the tether spin projectiles at speeds of up to 5000 mph. Once the payload is accelerated fully, the tether is released, throwing the projectile out of the launcher, into the atmosphere, and into orbit.