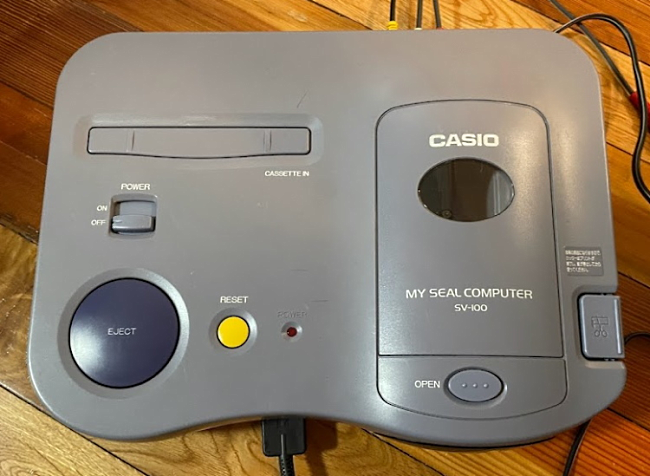 The Loopy is a 32-bit machine with a SuperH CPU, released in 1995 by Casio. There’s a slot on the front where a printer outputs. The printer is kind of the whole point of the Loopy. The printer prints small stickers, or as the console calls them, “seals”.

The games are cartridge-based. This is a bit of a surprise, as this came out the year after the launch of CD-based consoles like the Sony PlayStation, the NEC PC-FX, and the Sega Saturn. This may have been a cost-saving move for the main console; the game consoles not only contain the game ROM, but also the SRAM used to save the game.

So what kind of games did the Casio Loopy have? According to a Eurogamer interview, Loopy engineers Tetsuya Hayashi and Kunihiro Matsubara state that they didn’t originally design the console with women in mind; the goal was to provide a unique experience with the stickers. Since young girls liked to play with stickers, that became the target later as the launch lineup was drawn up. By the time commercials were made, the target audience was clear.

Which leaves us in a bit of a pickle. I am not a preteen Japanese girl. As a child, I wasn’t really into stickers as their impermanence bothered me. So I’m not sure I can judge this console fairly…

The Loopy was not a very successful system. In fact, FEMICOM Museum states that only one production run was made, and Octavius’ video review says that the console was discontinued a few weeks after launch.

See the commercials for the unit below and read much more on Nicole Express.

Comments Off on The 90’s console that printed stickers: The Casio Loopy #Vintage #Consoles @nicole_express