Maker Jargon and Slang for 2021

This past year, in my weekly maker tips newsletter, Gareth’s Tips, Tools, and Shop Tales, I started a semi-regular column of jargon, slang, and technical terms that I thought would be informative and/or entertaining to my readers.

Here is the collected list for 2021. I’ve also incorporated the jargon and slang that I included in the 3rd edition of The Maker’s Notebook (which also came out earlier this year). This is in no way comprehensive or even current (some of these are very old). There are just the terms that crossed my transom this year. Add your own in the Comments.

Blind hole – A hole that doesn’t penetrate the workpiece all the way through, as opposed to a through hole which does.

Bolt strippers – A pair of pliers. Said because using pliers on a bolt, when the proper wrench is not available, is a stripped fastener waiting to happen. 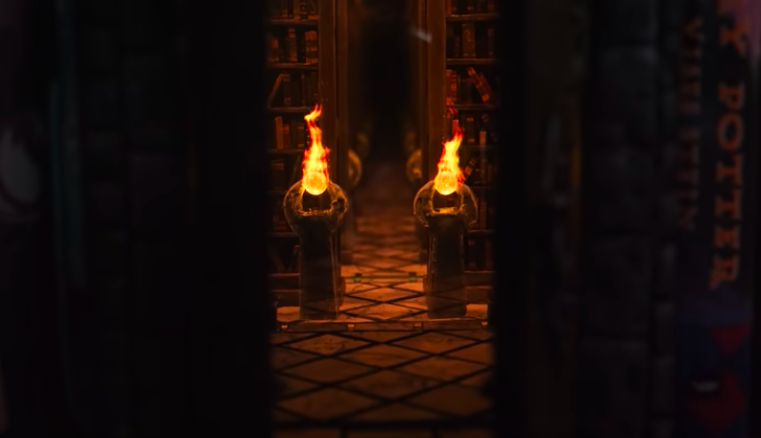 Book nook – A diorama built inside of an insert that slides onto a bookcase shelf. Science fiction, fantasy, and horror characters and scenes from books and films are popular book nook themes.

Buck – In material-working, a buck is a form (usually wood or metal) over which a metal, leather, or other material is hammer-formed. The term buck also refers to any of various heavy frames, racks, or jigs used to support materials or partially assembled components during manufacturing, as in aircraft assembly. Also: a door (or window) buck is a frame of wood or metal set in a partition, especially one of light masonry, to support door hinges, hardware, finish work, etc.

Canslaw – In metal detecting, the shredded pieces of aluminum cans found in the ground that were cut up by a lawnmower or plow. Canslaw and pull tabs are the bane of detectorists.

Dead bug mode – An IC chip with its pins in the air. Dead bug mode is used in freeform soldering where you construct a circuit without a circuit board by soldering the components directly to each other and to the pins of the IC.

Deo stick – [deodorant stick] Many trash bash (see below) modelers on YouTube issue challenges to each other to use a single trash type in a build. A frequently issued challenge is to build models exclusively out of “deo sticks.” Turns out, there are a lot of interesting plastic parts found inside of deodorant sticks.

Feel – The secret sauce of working the physical materials. Feel is knowing things like how much force, tension, torque, etc. you can safely apply to a given object. Largely a learned skill. 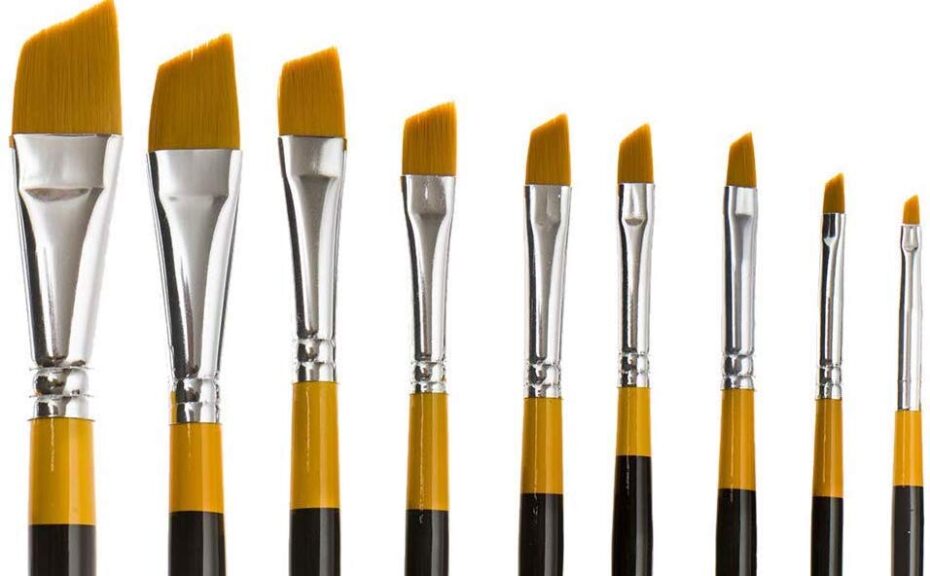 Ferrule – A ring or metal band that fits around the business end of a hand tool (where the tool meets the handle) to help give it strength and to help hold the tool in place. E.g., the ferrules on paint brushes help to hold and protect the bristles of the brush.

Grail [item] – An extremely hard-to-find object that you are forever looking for but unlikely to ever find. E.g., a grail book, or tool, or game.

Greeble – Bits of raised details that are added to the surface of an object to make it look more complex and visually interesting. Used in movie special effects, scale modeling, cosplay, etc. The term originated with the special effects team working on the first Star Wars movies. 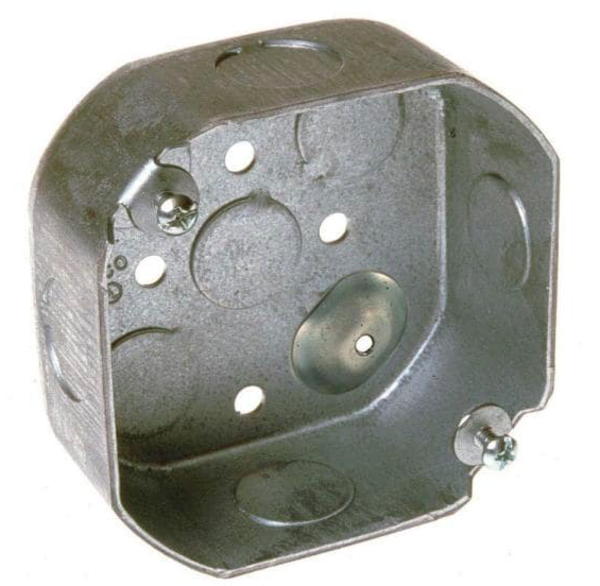 Grounding hump – A feature of an electrical junction box where the grounding hole is on a inwardly curved hump so that the grounding nut does not protrude beyond the box.

Guerilla making – Coined by German maker Laura Kampf, guerilla making is when you make (or repair/improve) something in a public space without asking permission.

Handyma’am — We hired someone recently to repair some old metal bi-fold metal doors on a closet. The woman who came to do the work described herself on her card as a handyma’am. We thought maybe she’d come up with it, but it turns out to be a growing term for female repair people.

Hogging out – In metalworking, woodworking, etc., to quickly remove a large amount of material from a workpiece.

Knitting – Coined by my old programming/hypermedia partner, Peter Sugarman, knitting is any repetitive, low-mental task that you can easily background or perform when you need a break from more taxing work. “I’ll do some knitting and fold these brochures while we talk.” 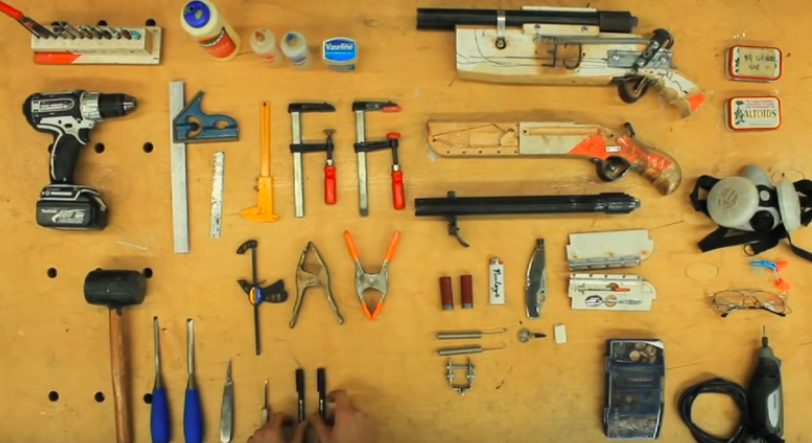 Knolling – A technique of grouping objects that are alike and arranging them at right angles to one another. Used for organizing or photographing collections of objects. Named after the very angular furniture of Florence Knoll.

Log jam – When you finish a project and there are a few bits left (spare bolts, circuit boards, etc…) that need to be put back in their rightful place. They’re not rubbish, but you don’t have time to sort them. So, you put them in a pile for later. Then, another project happens, more bits to the sort pile, and before you know it, you’ve got a “log jam” of (typically fiddly) things that need to flow downstream to their destinations, but they’re all snagged together in an ever-growing pile. Eventually, you either need to sit down and spend the day sorting or admit defeat and just throw everything away. [H/t Andrew Lewis]

Magic smoke – The caustic smoke that’s produced when an over-stressed circuit or component fails and burns, literally letting out a puff of smoke. The joke goes that the device works because it contains such magic smoke. If anything happens to “let the magic smoke out,” the device no longer functions. Powering a just-made device on for the first time is sometimes referred to as a “smoke test.” Also: blue smoke, magic blue smoke, and letting the genie out.

Makecation – Termed coined by Phil Torrone of Adafruit. A play on “staycation,” where you take time off but don’t go anywhere, and in this case, dedicate yourself to a special summer project (or two).

Maker Christmas – That Christmas morning-like feeling you get every time that you enter your shop/work area and look at the results of a previous day’s labors (at least when you’re happy with the results).

Maker math – When you do a cost/benefit analysis on making something vs. buying it, determine that it’s much more cost effective to buy, but you make it anyway because it’ll be fun, educational, and it will have been made by you.

Metal mountain – What miniature painters and tabletop gamers call the gigantic pile of yet-to-be painted metal and plastic miniatures that every hobbyist has and feels guilty about. Related: Shelf of shame – all of the tabletop games on the shelves that you’ve never gotten around to playing, but that doesn’t stop you from buying new ones.

Mother color – I recently learned of a (new to me) painting technique, called mother color. This is when you pick a thematic color and add that color to every other color in your painting, miniature, model, etc. to create color harmony throughout the piece. Here’s a video detailing the technique.

Percussive maintenance – Old military slang for whacking the daylights out of something to try and get it working again. Often done using a persuader.

Persuader – Any hammer, sledge, axe, or other tool used to “encourage” material to move.

Proud – When one workpiece, say a dovetail joint in woodworking, extends beyond flush. This is done so that the “proud” piece can be cut or sanded down to create a perfectly flush surface.

Shop shower – Spraying the “shop glitter” (work dust) off of yourself before leaving the workspace.

Spoilboard – A sacrificial piece of material (wood, fiberboard, plastic, metal) that goes under a workpiece being cut or drilled to help secure it in place and/or to prevent the tool from cutting into anything it shouldn’t.

Swarf – Pieces of metal, wood, or plastic debris created during machining, woodworking, or similar subtractive processes. Not to be confused with kerf, which is the cut made into the material. Kerf is commonly understood to be the width of the material that’s removed during cutting, and it’s important to consider kerf thickness when measuring and cutting. [H/t Bob Knetzger]

Tear out (or chip out) – What happens when the grain of wood along an edge being cut cannot support itself and tears away along the cut. Methods of preventing tear out include using painter’s tape along the cut line or pre-scoring the line with a razor knife.

Tinkeritis – When you overwork, futz with, and try and improve something that still works poorly because you really don’t know what the hell you’re doing. Reader txinkman submitted this one and says he knows it in reference to motorcycles. The guy who originally owned the house I just sold had a classic case of tinkeritis. He thought he was a well-rounded handyman. He wasn’t. 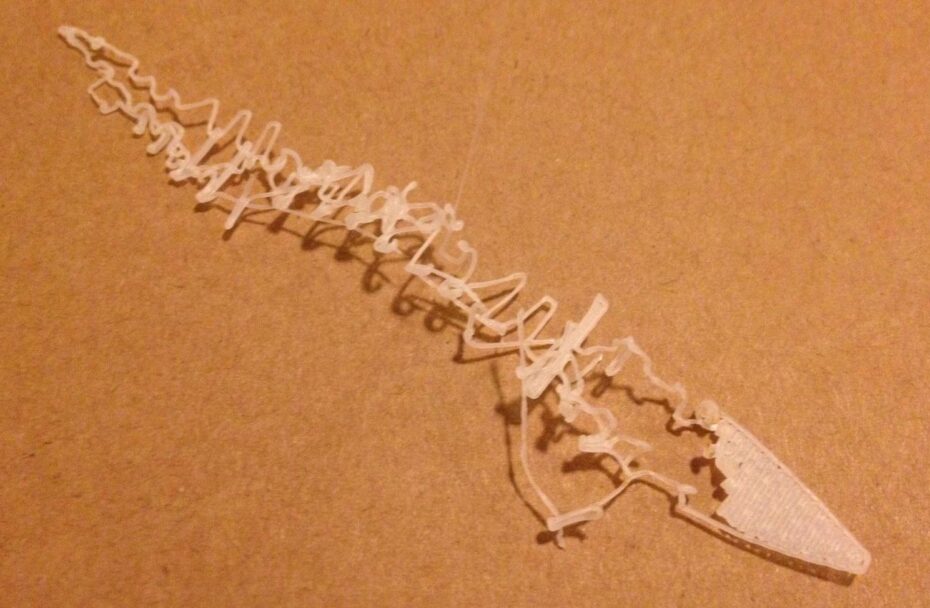 One of my first “transporter accidents.” I call this one “Shipwrecked.”

Transporter accident – A 3D print that has failed, creating a tangled mess of plastic where your object was supposed to be. Also: spaghetti, spaghetti monster, or angel hair pasta.

Unobtanium – Unusual, costly, or theoretical material that is impossible to acquire. The opposite of obtainium which is any material that you can beg, borrow, or steal.

Wave a dead chicken – To basically resort to voodoo—any irrational act— in a last-ditch effort to get something to work (or to satisfy a colleague, boss, etc. From early hacker slang (The Jargon File).

WDITOT -“Why Didn’t I Think Of That.” Not to be confused with ID10T, which is another thing entirely. [via Steve Roberts] 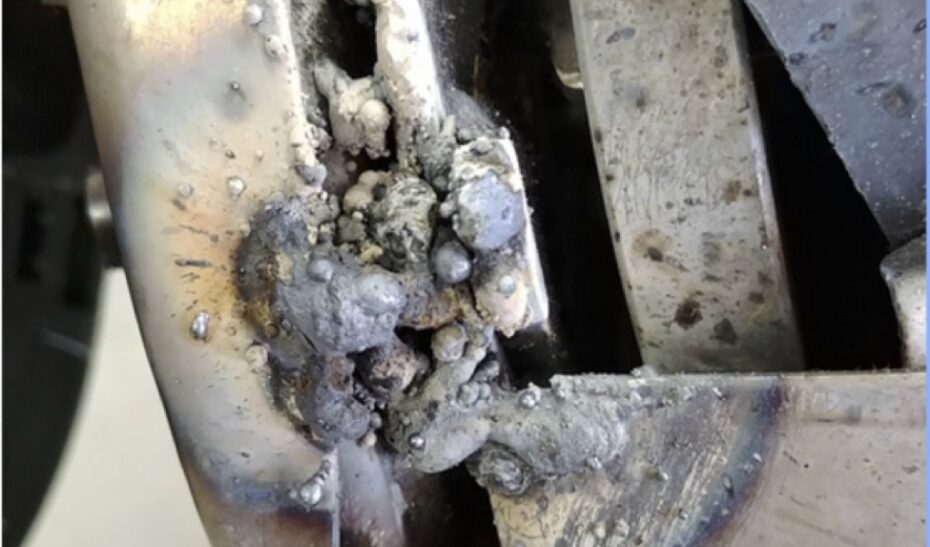 Welding boogers – Bad, ugly welds or a weld blob that has adhered someplace where you don’t want it. Also, a bad weld or a bad welder: “I made a total booger weld,” “Even after years of messing around, I’m still a booger welder.”

Witness marks – An intentional, accidental, or naturally-occurring spot – a line, a groove, or other contrasting area – that serves as an indicator of how things previously were implemented, used, repaired, or what processes were followed. The term is commonly used in clock-making. Also, marks made in two workpieces to aid in positioning them.

Zenithal priming – A painting technique that creates pre-shading by priming the object (e.g., a gaming miniature) in one color and then spray painting from the top (zenith) with a lighter color (usually white or light gray) to create a top-down underlight that will show through subsequent thin basecoats. See this excellent zenithal painting guide on Miniac.