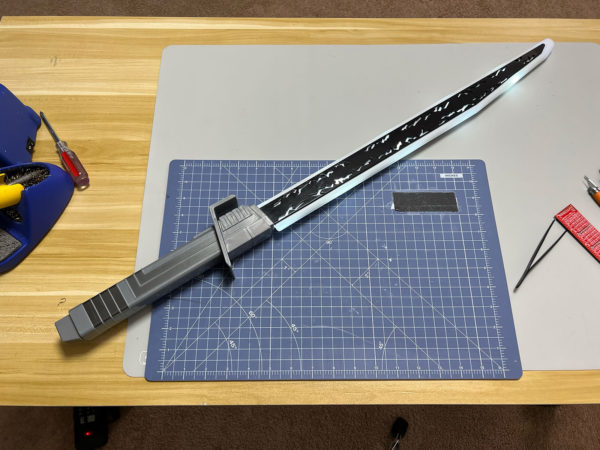 We’ve been kicking around this Darksaber Toy from Hasbro for the kiddo and I’ve been meaning to see if it’s possible to add more LEDs. This is intended for young Padawans so the design is pretty well built to take a few beatings. Even though it only has seven LEDs, the blade illuminates pretty well and I was curious to see how they’re being diffused. 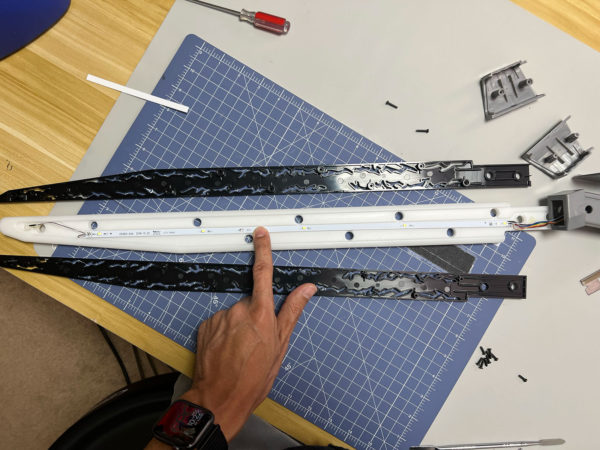 The blade is made up of three pieces that are clam shelled together with about a dozen screws. The black covers feature standoffs that fit through the holes across the blade. The core of the blade is transparent plastic with a recess in the center for the PCB. Eight, err, seven LEDs are very spaced apart on this rather long and skinny PCB (Note: One of the LEDs are actually not populated, I didn’t notice after this write-up). Each is LED is labeled and the PCB faces down against the plastic when assembled. 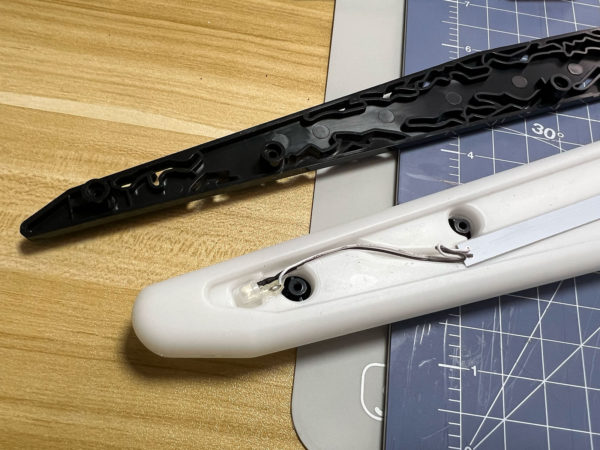 The tip of the blade has a free-wired common 5mm LED hot glued in place. This is a good way to get the tip lit given the shape and angle of the blade. 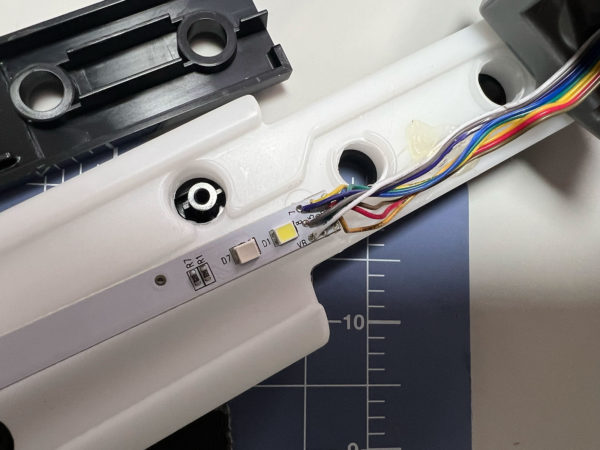 The end of the PCB near the hilt features two different SMD LEDs. The blade only uses two colors, white and blue. 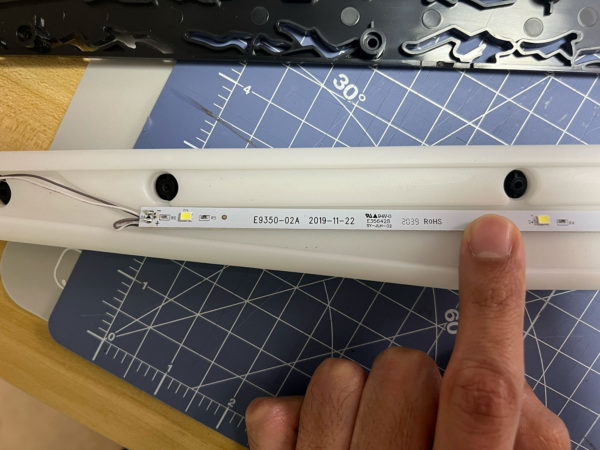 The other end of the PCB has the manufacturing date and other markings. 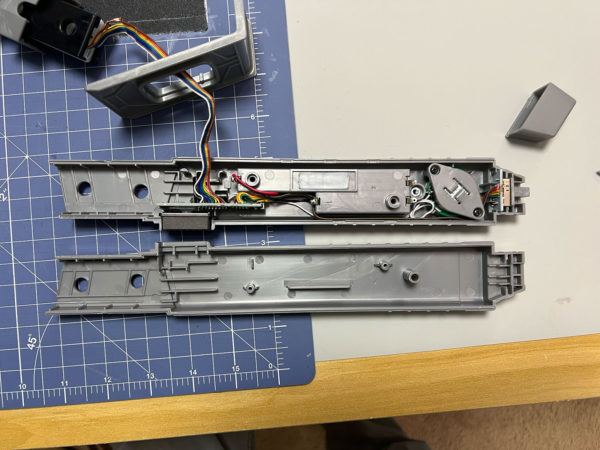 The hilt is two halves that are secured together with screws located behind the AAA batteries. The hilt features a built-in battery holder with a standard single-screw covering. The mode switch is at the bottom of the pommel below the speaker. The main PCB is fitted just behind the on/off switch. 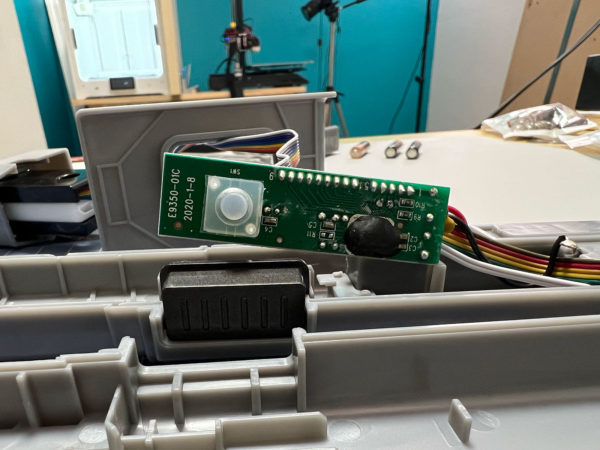 The front of the board has a rubber actuator fitted on top of a momentary button. The chip is behind a black blob, standard practice for a consumer product. 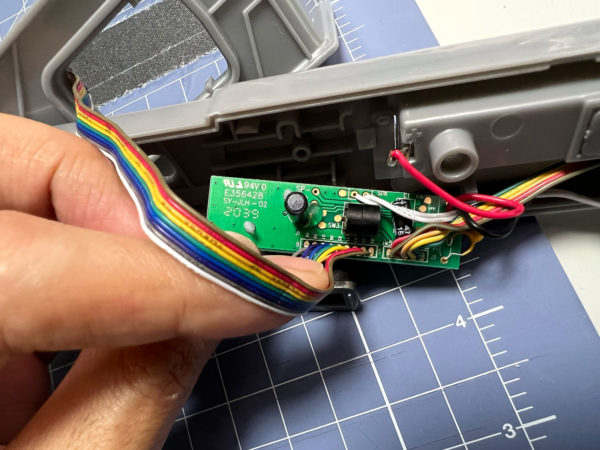 The back of the board has labeled pins for the ribbon cable that connects the LED strip. I’m assuming the black cylinder is the tilt-switch for triggering sounds and animations. 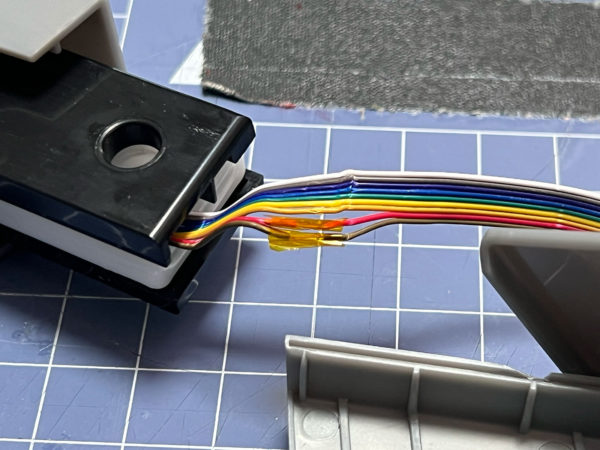 While putting it back together, I forgot to adjust the ribbon cable before sliding the blade back into the hilt, so the cable got kinked – Oops! Just peeled some wire insulation, nothing some Kapton tape wouldn’t fix. Lesson learned. 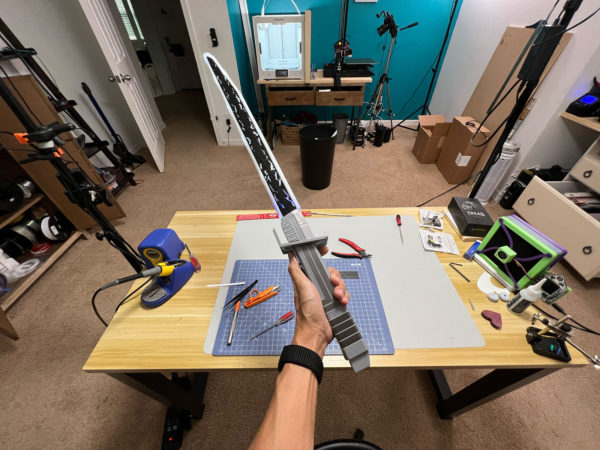 And it still works! Adding more LEDs sure does sound fun but that will have to wait for another weekend.