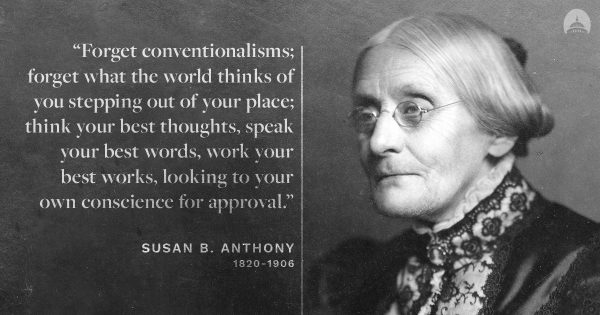 Today we celebrate Susan B. Anthony on her birthday, February 15th — Susan B. Anthony Day! Anthony was an American social reformer, women’s rights activist, and brilliant orator who played a pivotal role in the women’s suffrage movement. In her last speech ended with the words “Failure is impossible!”

Susan B. Anthony in her own words, from historyplace:

It was we, the people, not we, the white male citizens, nor yet we, the male citizens; but we, the whole people, who formed this Union. And we formed it, not to give the blessings of liberty, but to secure them; not to the half of ourselves and the half of our posterity, but to the whole people—women as well as men. And it is downright mockery to talk to women of their enjoyment of the blessings of liberty while they are denied the use of the only means of securing them provided by this democratic-republican government—the ballot.

From the website for the Susan B. Anthony House:

In the 1870s Anthony campaigned vigorously for women’s suffrage on speaking tours in the West. Anthony, three of her sisters, and other women were arrested in Rochester in 1872 for voting. Anthony refused to pay her streetcar fare to the police station because she was “traveling under protest at the government’s expense.” She was arraigned with other women and the election inspectors who had allowed her to vote in Rochester Common Council chambers. She refused to pay bail and applied for habeas corpus, but her lawyer paid the bail, keeping the case from the Supreme Court. She was indicted in Albany, and the Rochester District Attorney asked for a change of venue because a jury might be prejudiced in her favor. At her trial in Canandaigua in 1873, the judge instructed the jury to find her guilty without discussion. (The jury didn’t get to discuss the verdict!) He fined her $100 and made her pay courtroom fees, but did not imprison her when she refused to pay, therefore denying her the chance to appeal.

In 1877, she gathered petitions from 26 states with 10,000 signatures, but Congress laughed at them. She appeared before every congress from 1869 to 1906 to ask for passage of a suffrage amendment. Between 1881 and 1885 Anthony, Stanton and Matilda Joslin Gage collaborated on and published the History of Woman Suffrage. The last volume, edited by Anthony and Ida Husted Harper, was published in 1902.

More about Susan B. Anthony!