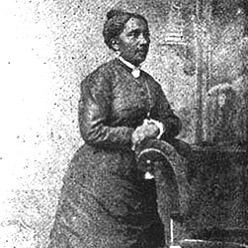 Elizabeth Jennings Graham was an African-American teacher and civil rights figure. In 1854, Graham insisted on her right to ride on an available New York City streetcar at a time when all such companies were private and most operated segregated cars. Via Zinn Education Project

Pre-Civil War Manhattan may have been home to the nation’s largest African-American population and New York’s Black residents may have paid taxes and owned property, but riding the bus with whites, well, that was a different story. Some buses bore large “Colored Persons Allowed” signs, while all other buses—those without the sign—were governed by a rather arbitrary system of passenger choice. . .

Against such a volatile backdrop, Lizzie Jennings opted for a bus without the “Colored Persons Allowed” sign. The New York Tribune described what happened next: “She got upon one of the Company’s cars on the Sabbath, to ride to church. The conductor undertook to get her off, first alleging the car was full; when that was shown to be false, he pretended the other passengers were displeased at her presence; but (when) she insisted on her rights, he took hold of her by force to expel her. She resisted.” . . .

This would not be the end of it. “Jennings was well connected,” says Williams. “Her father was an important businessman and community leader with ties to the two major Black churches in the city.” Not satisfied with the massive rally that took place the following day at her church, Elizabeth Jennings hired the law firm of Culver, Parker & Arthur and took the Third Avenue Railway Company to court.

In a classic “who knew?” situation, Jennings was represented by a 24-year-old lawyer named Chester A. Arthur—yes, he who would go on to become the 21st president upon the death of James A. Garfield in 1881. The trial took place in the bus company’s home base of Brooklyn—then a separate city—where, in early 1855, Judge William Rockwell of the Brooklyn Circuit Court ruled in the Black schoolteacher’s favor.

By 1860, all of the city’s street and rail cars were desegregated.