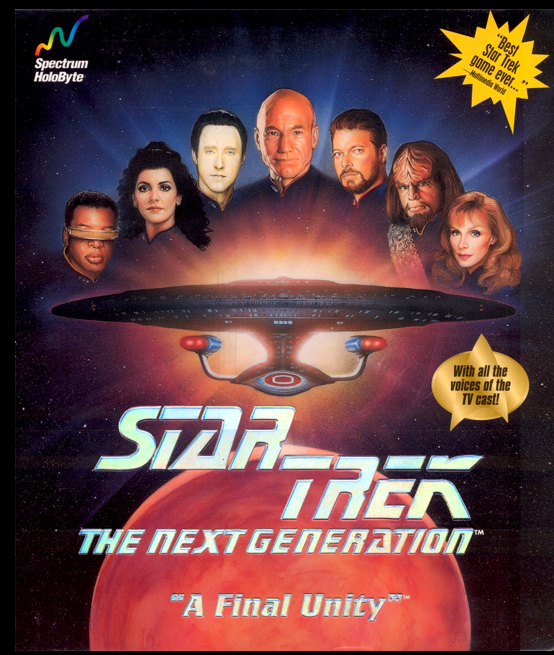 Star Trek is not an action-adventure series. We might end up thinking that if we look at Discovery or the J.J. Abrams Star Trek movies, but in both the original Star Trek and Star Trek: The Next Generation, episodes centered around ideas. More often than not it wasn’t phasers that saved the day — it was diplomacy, philosophy, or science.

All of which makes it hard to make a Star Trek video game. Star Trek games that focus on space battles or assault missions just don’t capture the heart of Star Trek. There is one game that really managed to catch lightning in a bottle. 1995’s Star Trek: TNG game A Final Unity. The game enlists the voice talents of the original entire TNG cast in a story that fuses diplomacy, away missions, and character relationships to delivery a true TNG experience.

A Final Unity plays out like a multi-part episode of TNG, with the eventual universe-at-risk stakes reminiscent of the most effective season finales. The cold open, rendered in cutting-edge-for-1995 CG, starts with a captain’s log from Patrick Stewart. A seemingly innocent distress call leads to a mystery regarding an ancient artifact; over the course of the next 15 hours, the story twists and turns across multiple planets with franchise hallmarks Vulcans and Romulans alongside a new alien species known as the Chodak, ultimately in pursuit of the reality-bending Unity Device.

Away missions are when the game truly feels like an interactive episode. One tangible way A Final Unity is better than 25th Anniversary is its away team selection. While 25th Anniversary locked you into a crew of Kirk, Spock, McCoy, and literally disposable redshirts, A Final Unity gives you the freedom to create your own TNG away team (depending on your difficulty setting, it can recommend team selection for you). Like seminal adventure title Maniac Mansion, each character comes with different abilities. For example, Data’s android strength may be necessary to overcome an obstacle while Geordi’s visor capabilities may detect things a normal tricorder scan will not. With the ability to beam up to the Enterprise at any time, swapping away team crew is easy, giving players the ability to think like a captain planning for the best solution.

Comments Off on A Final Unity: Star Trek The Next Generation’s Forgotten Game #SciFiSunday