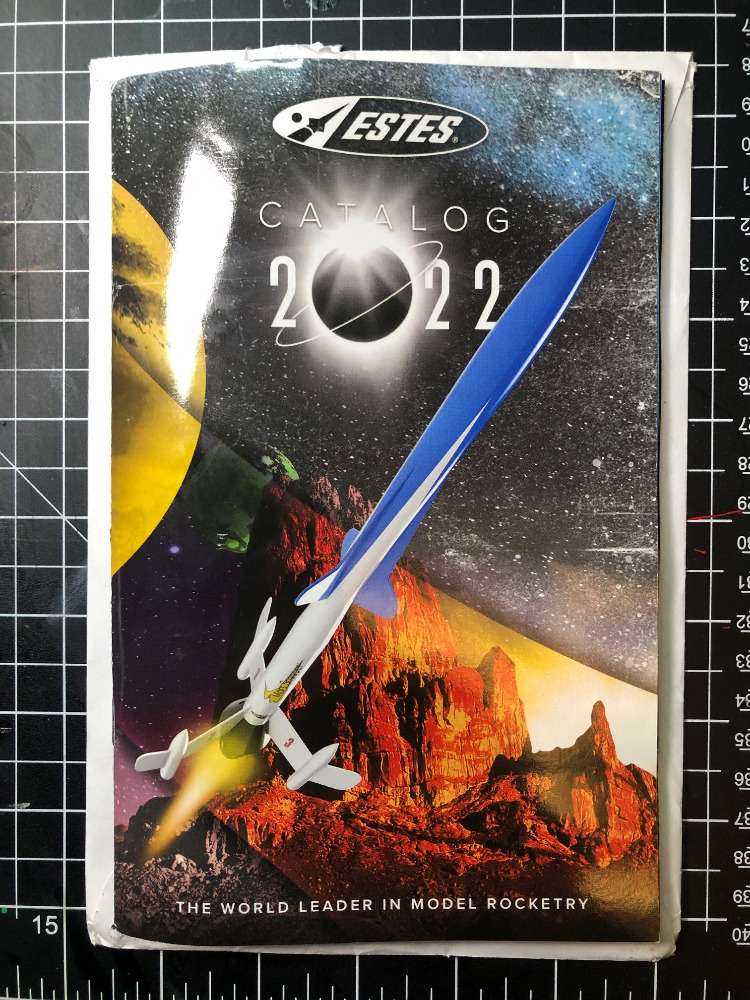 A month or so ago, in my online travels, I ran into an offer to get a “free, full-color” Estes rocketry catalog. I was shocked and delighted to learn that a proper paper catalog still exists.

I had lived for the Estes catalog when I was a pre-teen and teen. Getting one in the mail was like Christmas morning. So, I signed up for my 2022 catalog and immediately forgot about it.

A few days ago, I opened up our mailbox and there it was, and along with it came the same monster buzz of excitement and possibility that I used to get as a kid.

The 2022 catalog is quite substantial, at over 100 pages. And it is glossy, beautifully designed, and clearly laid out.

Opening it, I was tickled to immediately see a group shot of the Estes staff in front of their facility in Penrose, CO. I remember similar group photos, in that same location, from yesteryear. Dig that groovy space age architecture! 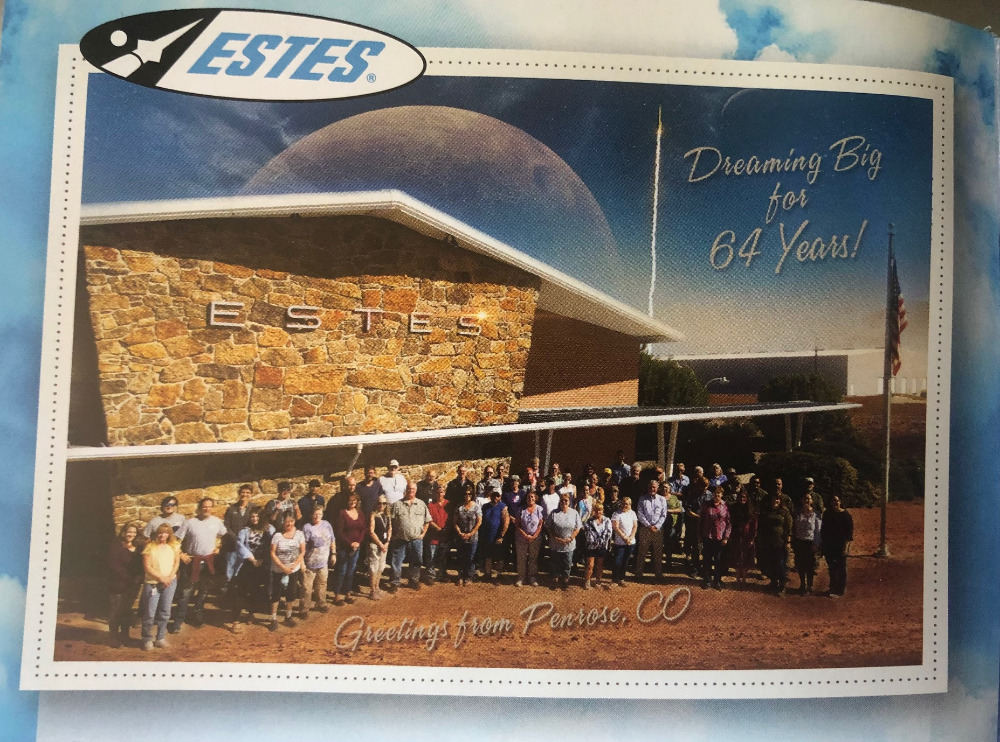 I had to laugh out loud upon turning the page to the first product offering, the starter set, now the Astrocam. In the 1970s, the starter set was the Astron Alpha, a rather basic, homely 3-fin model that sold by itself for all of $1.50. (Below is a picture of mine which I re-discovered several years ago — hard to believe this is over 50 years old.) Besides the Alpha, the 70s starter kit included a launch pad and launch controller, all for under $10. On the opposite end of the 1970s desire spectrum was the Cineroc, a rocket outfitted with a Super 8 video camera, something that felt like the bleeding edge of space age technology at the time. It sold for the princely sum of $19.95. I didn’t know anyone who had one, but all of us coveted it.

In 2022, the starter set is now the Astrocam, the modern version of the Cineroc. It comes with an HD camera with USB. It also comes with the Porta-Pad II launcher and what looks like the exact same launcher controller that I had in the 1970s. This starter set is $80. That sounds like an unapproachable sum for a kid, but it’s actually not much more over inflation. 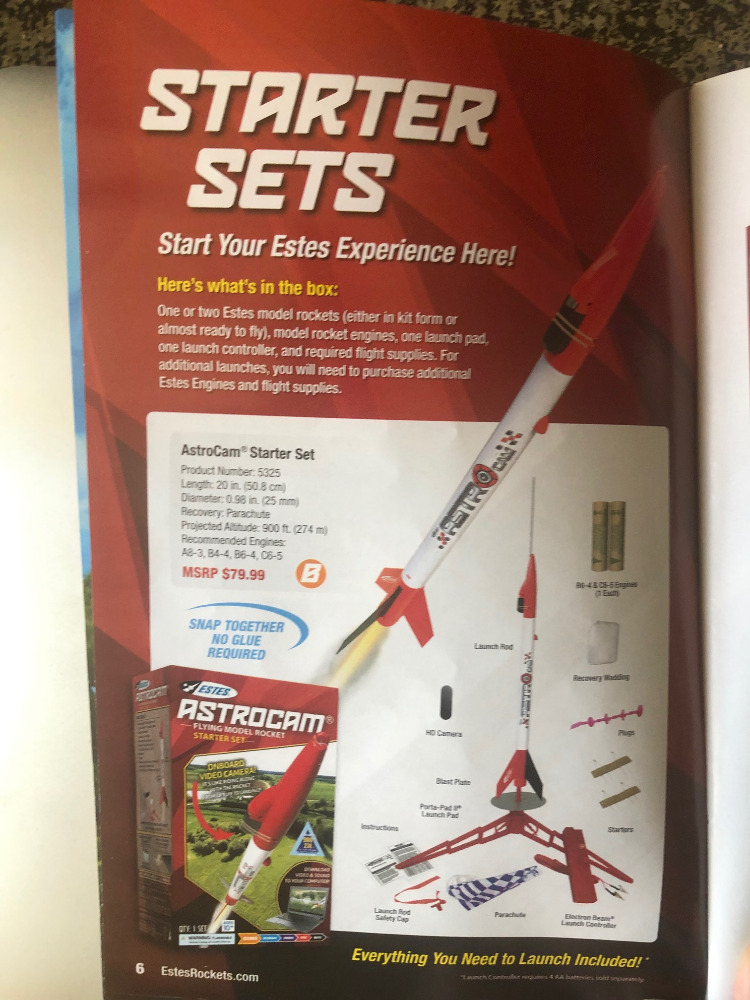 One of the things I loved most about model rocketry was building the birds myself. So, it’s disappointing to see how many current Estes models come “ready to fly” or in kits with all snap-together plastic parts. Thankfully, they still offer full build-it-yourself kits, right down to the balsa wood fins (now pre-cut). 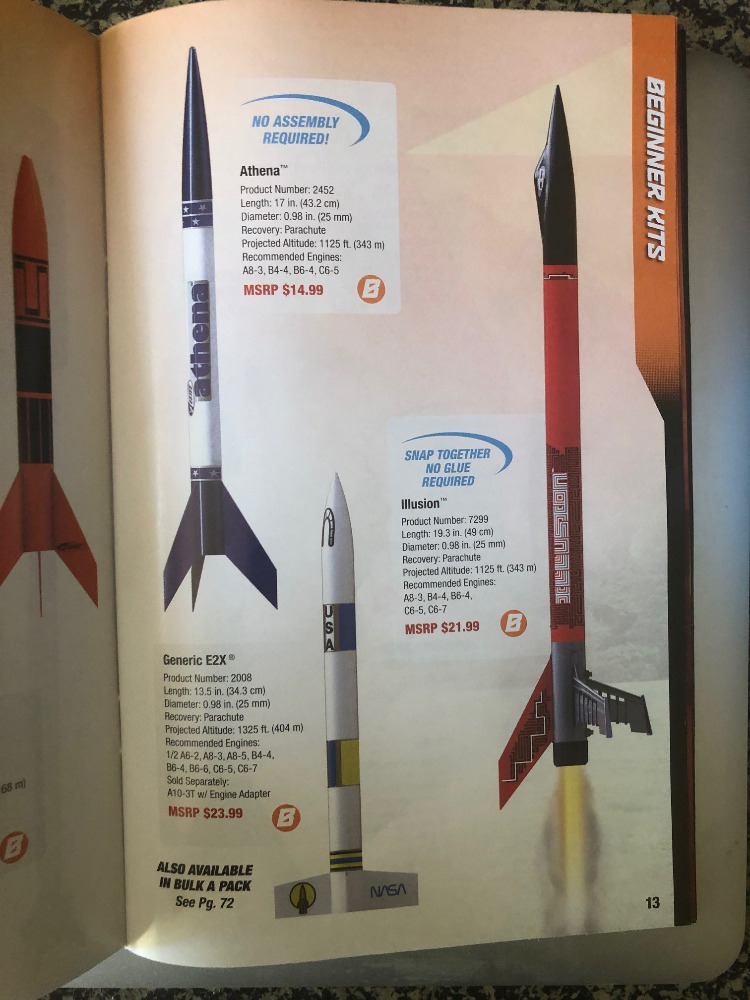 One thing that strikes me about the modern catalog is how similar it is in layout and content to older editions, right down to the pitch to join the National Assoc of Rocketry on the last page. I was also tickled to see some favorite rockets from my youth are still for sale, like Big Bertha, the Goblin, and the Mars Snooper. 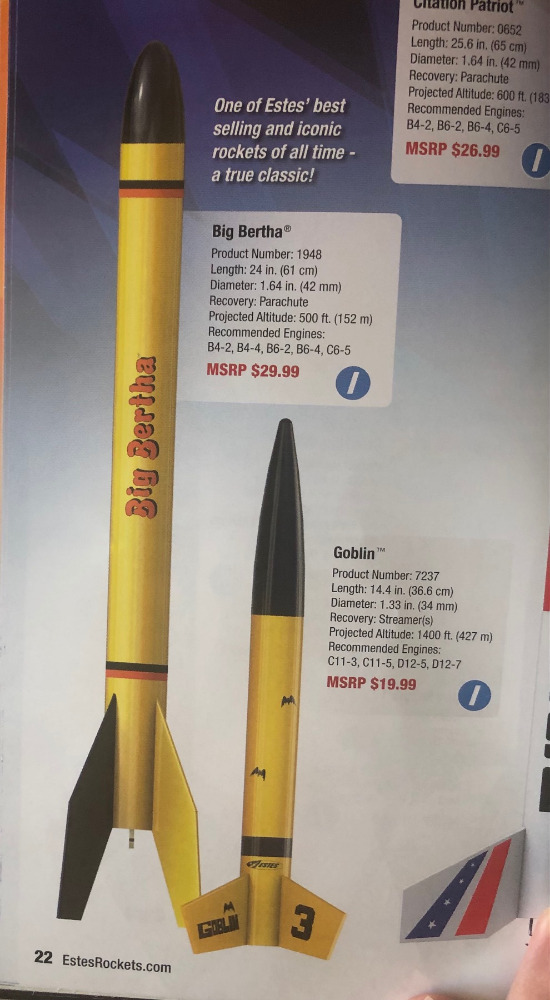 When I was a kid, the rocket challenge we always got excited about was sending the Scrambler up and getting it back… um… unscrambled. This was a rocket with a clear payload bay below the nosecone big enough to carry a raw egg. It’s great to see that they still have an egg transport, now called Green Eggs. Why the name? The payload plastic is tinted green. If the egg breaks in fight or on landing, green eggs is what you get back. [Cue: the sad trombone music.] 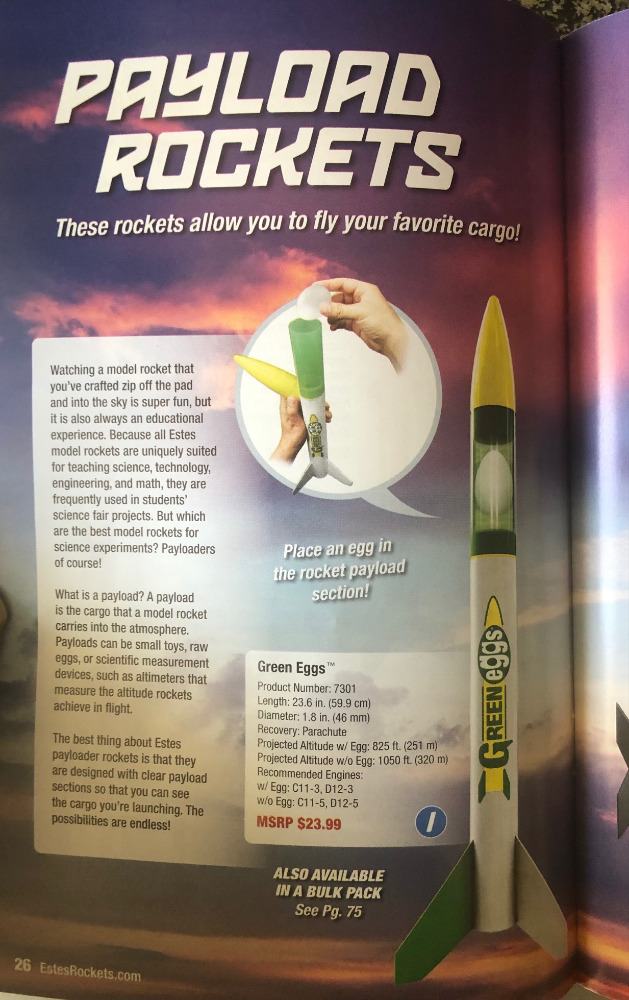 When I first got into model rocketry in the late 70s, the two giants of the hobby were Vern Estes (founder of Estes Industries, along with his wife Gleda) and G. Harry Stine (often called the father of the hobby, founder of the National Association of Rocketry, and the author of The Model Rocketry Handbook). One of Stine’s early conceptual, never-built designs was a rocket called the Antar. Every rocket nerd, young and old, probably dreamed of building this sci-fi-looking ship. I did. So, I was thrilled when Estes announced the release of an Antar kit last year. I’ve been out of the hobby for many decades, but I must admit that I’m itching to build one of these. 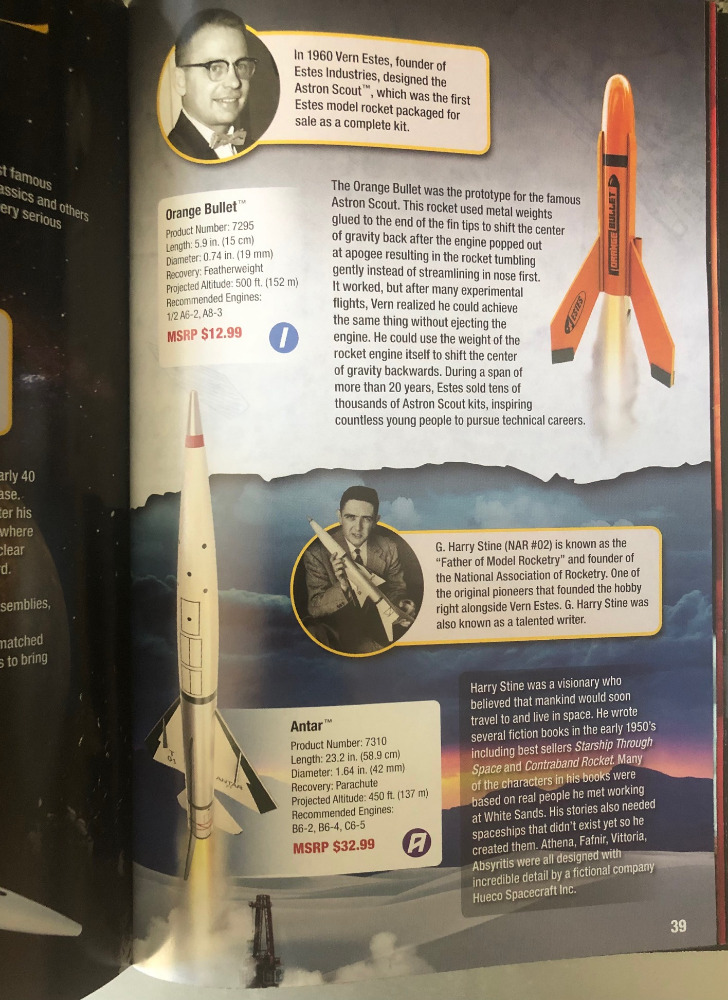 It was a big deal in the 70s when Estes released their biggest rocket engine yet, the D-class (at up to 20 N-seconds of total impulse). The dramatic lift-offs and power of these engines was a real boost to the hobby. Today, Estes offers an even more powerful engine, the F (at up to nearly 34 N-sec impulse). Where a D engine could handle a lift weight of up to 14 oz, an E can handle up to 21 oz. 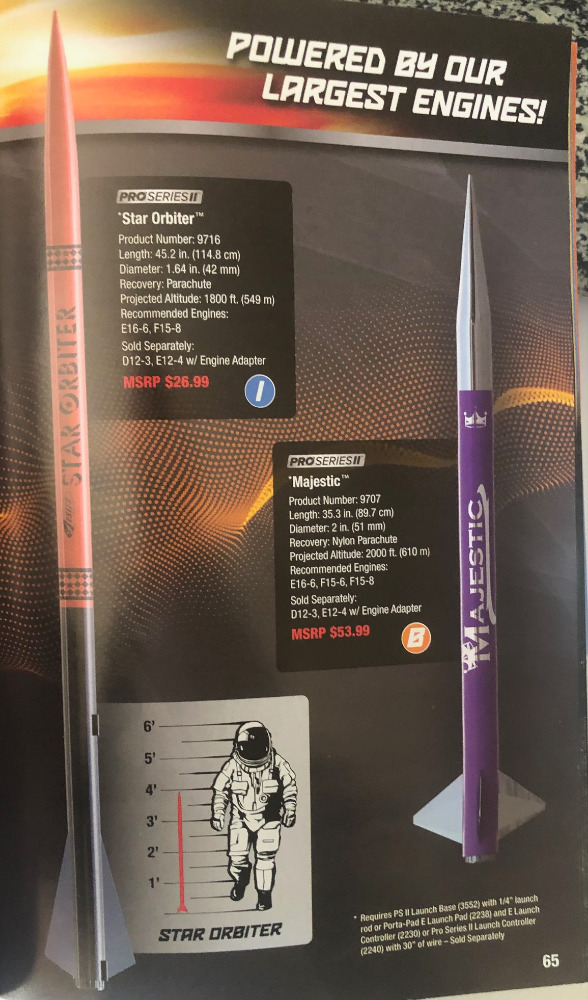 As a teen, I could never afford the Designer’s Special, a large bundle of parts for you to design your own rockets, but it was a huge source of inspiration anyway. I would try to design my own rockets on paper, constraining myself to the parts found in this bundle. Given that so many of the rockets are now ready-to-fly or snap-together, I’m happy to see that the Designer Special lives on. 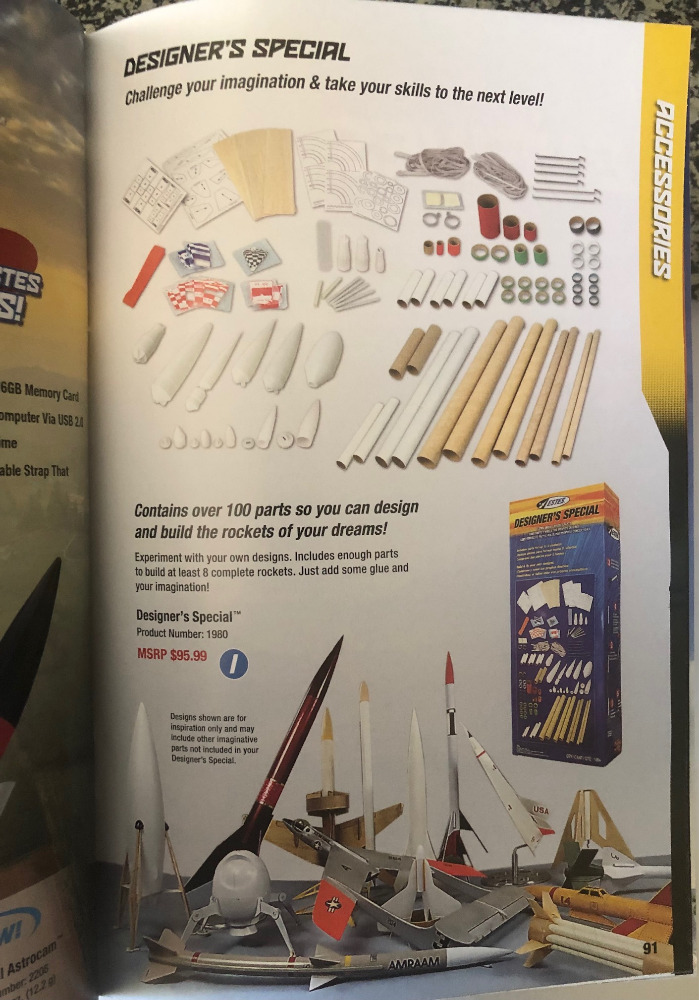 One of the many cool things about Estes from the get-go was its focus on science and technology education. The current catalog is a little lighter on this content, but there’s still enough technical information for budding scientists and engineers to sink their teeth into. I’m sure over the years, Estes has endeavored to get the balance right between commercial appeal/object value and sci-tech education and deeper making. 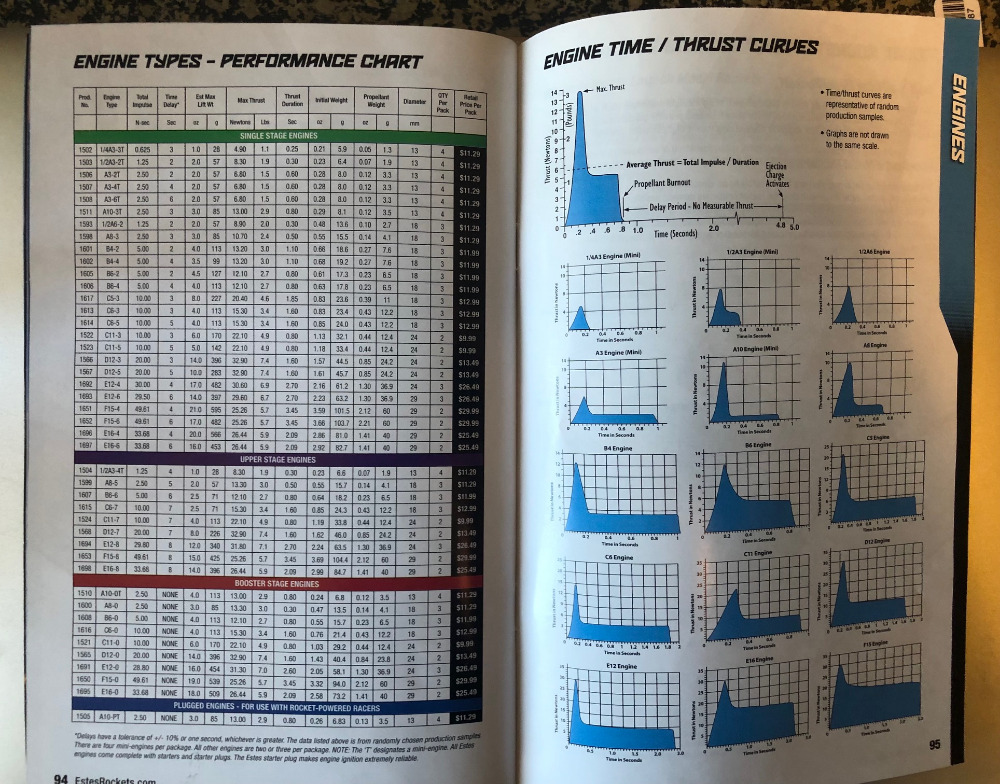 Given all of the distractions of our age and the constant competition for kids’ attention, it’s great to see a company like Estes remaining true to its original mission of inspiring the imaginations of the young (and not-so-young) and teaching science and engineering through a fun and engaging hobby. Or, as Estes puts it: “…from backyards and school yards to worlds beyond.” 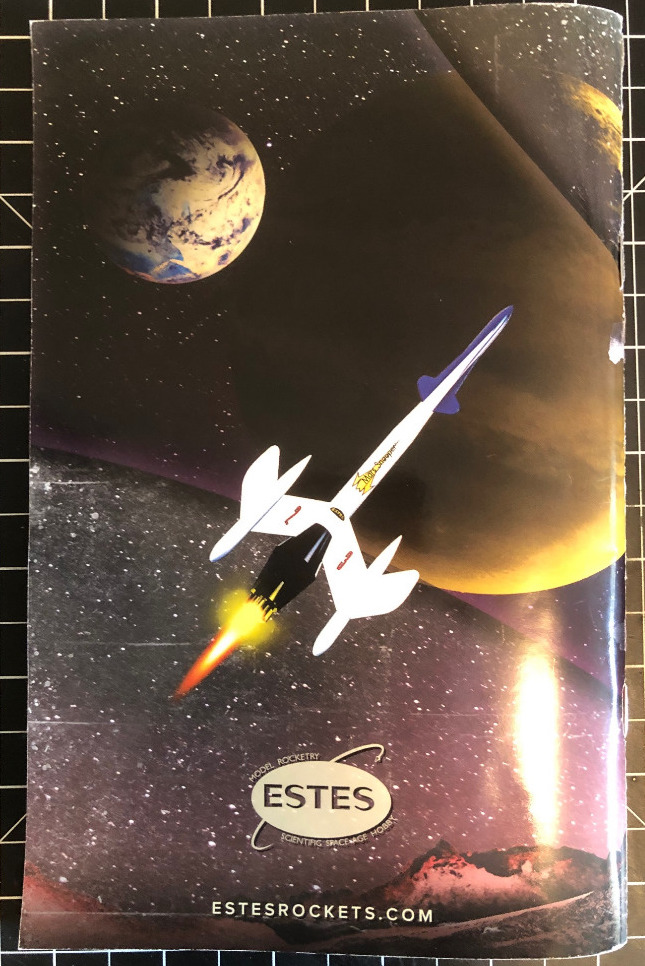 You can order your own Estes print catalog here.