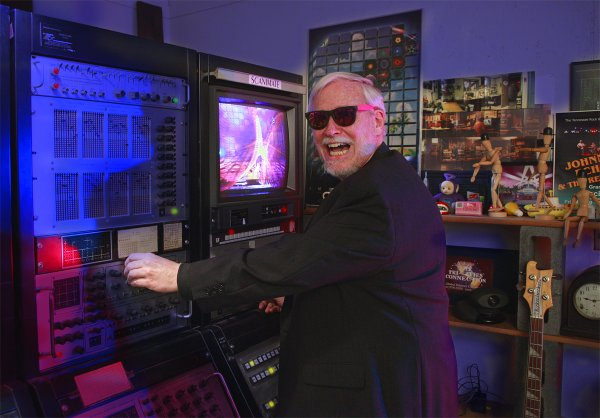 Dave Sieg, for the past 20 years, has tried to keep at least one working Scanimate computer running in his studio. He’s managed to put together a fully functional production suite based on vintage as well as state of the art video equipment, and a Scanimate has been used in several recent productions. But what is a Scanimate?

Scanimate is an analog computer animation (video synthesizer) system developed from the late 1960s to the 1980s.

The 8 Scanimate systems were used to produce much of the video-based animation seen on television between most of the 1970s and early 1980s in commercials, promotions, and show openings. One of the major advantages the Scanimate system had over film-based animation and computer animation was the ability to create animations in real time. The speed with which animation could be produced on the system because of this, as well as its range of possible effects, helped it to supersede film-based animation techniques for television graphics. By the mid-1980s, it was superseded by digital computer animation, which produced sharper images and more sophisticated 3D imagery – Wikipedia.

See the demo below and more at scanimate.com.