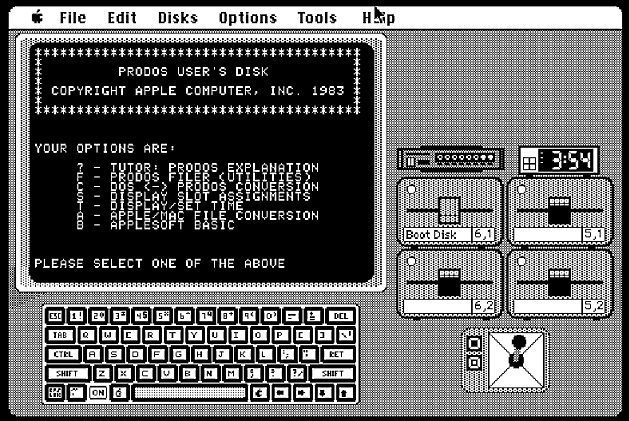 II in a Mac was the first Apple II emulator. The emulator ran on a 512K Mac and was released in November 1985. Initially it could run Apple II+ programs, but later evolved to include IIc and IIe software. This was long before the appearance of the 1991 Apple IIe Card for the Mac LC.

– Average performance was about half the speed of an Apple II.
– Extra Mac memory was used to emulate the Applied Engineering Ramworks II card.
– Text could be cut and pasted in either direction between the Mac and Apple II applications using the clipboard.
– Graphics could be cut and pasted from Apple II programs into Macpaint documents.
– Copy protected Apple II software does not work with the emulator.
– II-in-a-Mac had key disk copy protection but could be installed on a hard drive or double-sided Mac floppy disk.

See more and download the software on The Internet Archive.