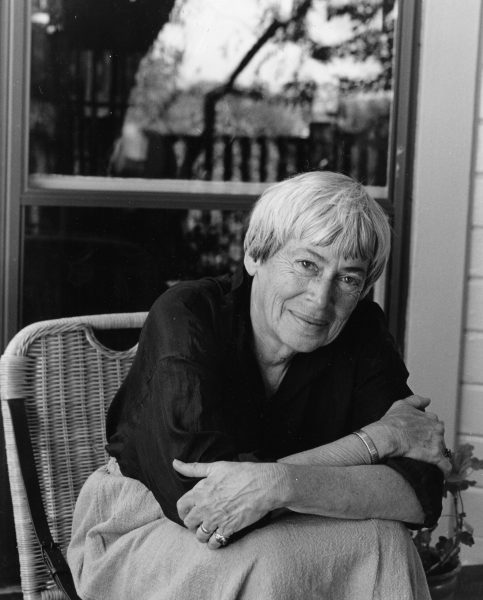 Celebrating the great American writer Ursula K. Le Guin! Le Guin is an American author of novels, children’s books, and short stories, mainly in the genres of fantasy and science fiction. She has also written poetry and essays. In 2016, The New York Times described her as “America’s greatest living science fiction writer.” — from Wikipedia

From a profile of Ursula K. Le Guin in The New Yorker

“I just didn’t know what to do with my stuff until I stumbled into science fiction and fantasy,” Le Guin says. “And then, of course, they knew what to do with it.” “They” were the editors, fans, and fellow-authors who gave her an audience for her work. If science fiction was down-market, it was at least a market. More than that, genre supplied a ready-made set of tools, including spaceships, planets, and aliens, plus a realm—the future—that set no limits on the imagination. She found that science fiction suited what she called, in a letter to her mother, her “peculiar” talent, and she felt a lightheartedness in her writing that had to do with letting go of ambitions and constraints. In the fall of 1966, when she was thirty-seven, Le Guin began “A Wizard of Earthsea.” In the next few years—which also saw her march against the Vietnam War and dance in a conga line with Allen Ginsberg, when he came to Portland to read Vedas for peace—she produced her great early work, including, in quick succession, “The Left Hand of Darkness,” “The Lathe of Heaven,” “The Farthest Shore,” and “The Dispossessed,” her ambitious novel of anarchist utopia.

Science fiction opened her up further to writing from alien points of view—composing the political manifesto of an ant, wondering what it would be like if humans had the seasonal sexuality of birds, imagining love in a society in which a marriage involves four people. Le Guin says her ambition has always been “not just trying to get into other minds but other beings.” She adds, “Somewhere in the nineteenth century a line got drawn: you can’t do this for grownups. But fantasy and science fiction just kind of walked around the line.” Another use of the fantastic for Le Guin was to bring her ethical concerns into her fiction without becoming didactic. Take a metaphor far enough and it becomes a parable, as with her widely anthologized story “The Ones Who Walk Away from Omelas.” Le Guin’s story begins with an ethical question posed by William James: If all could be made blissfully happy by the fact that one person was being kept in torment, would we accept that condition? She gives the problem just enough reality for the reader to picture the single abused child and feel the consequences of the bargain.