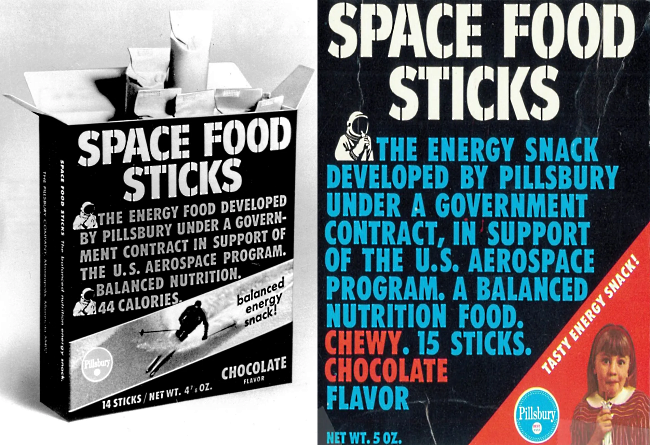 The space food evolutionary journey for Pillsbury was first  to create what would eventually become “Space Food Sticks” for several Apollo missions and Skylab. This started in the early 1960s.

Howard Bauman, Pillsbury’s chief food technologist at the time, led a team at the company that created the first solid food consumed by a NASA astronaut. Scott Carpenter ate small “compressed” food cubes made by Pillsbury on board Aurora 7 in 1962.

Then NASA had a request. Could Pillsbury’s best and brightest also make a food that astronauts could eat with their helmets on? The snack had to be small enough to go through a small airtight opening in the helmet – so the rod-shaped food sticks were born, as the Apollo program drew closer to its historic moment.

The sticks accompanied astronauts Neil Armstrong and Buzz Aldrin when their “Eagle” spacecraft landed on the moon on July 20, 1969.

Pillsbury began advertising the sticks on television, as Space Food Sticks, clearly making the link to the space program. 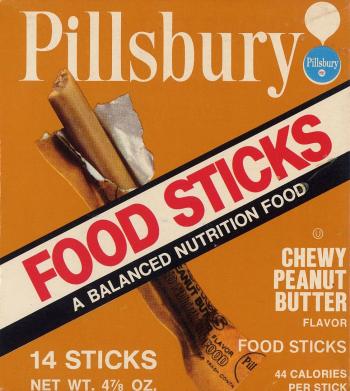 But in 1971, just two years after Armstrong and Aldrin walked on the moon, Pillsbury decided to drop ‘Space’ from the advertising for the sticks, and ultimately from the product name.

John Szafranski, a grocery product manager for Pillsbury at the time, said, “We used the word ‘Space’ because of the NASA project, because the product did indeed go to outer space, and because they were first marketed at a time when public excitement about the space program was at a peak.”

He added that Pillsbury stopped using ‘Space’ in the product name because “the image that space food has in the minds of many consumers is a negative one. They think space food in general is dry – dehydrated – and not necessarily very tasty.”

The success of Pillsbury Food Sticks was short-lived. They were only available until the 1980s, as waning interest led them to be discontinued. Other copycat versions soon became available in their place.

Space Food Sticks appeared in pop culture over the years, including on “The Simpsons,” in the movie “Super 8” and in books from R.L. Stine.

Check out the videos below – the first for Space Food Sticks and the second for Food Sticks. And read more in the wonderful article here.