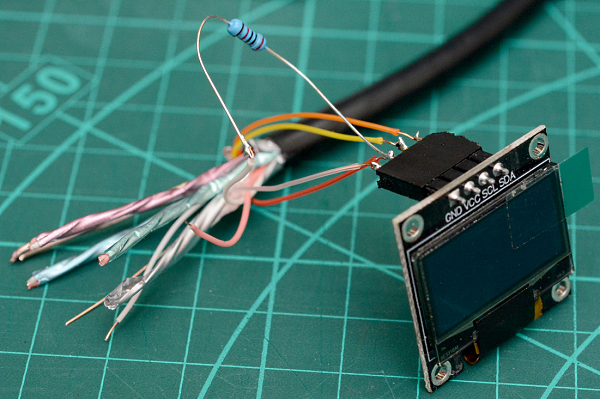 Have you ever wanted to use an inexpensive LCD display directly plugged into a computer only using a HDMI cable without a microcontroller or support circuitry? Crazy you say, it needs an interface, surely… (and this is NOT an April Fool’s Joke)

HDMI DDC, display data channel, is a protocol for reading information about what resolutions and so on a monitor supports. It was later extended to DDC/CI, that lets you set brightness and other parameters, but fundamentally, the original idea was to stick a cheap i2c eeprom on each device with some basic info on it.

Tiny OLED dot-matrix displays often have an i2c controller, so I had the idea to try and plug one directly into an HDMI port. Hilarious! Let’s do it.

With one pullup resistor and a cut HDMI cable, some clever software was coded to use the display!

But that’s not all – how about putting a Linux desktop on the display? That’s what was done!

See the video below, more in the article here and the code on GitHub.

Comments Off on The smallest HDMI display: a common breakout board wired direct #HDMI #Hacks #Displays