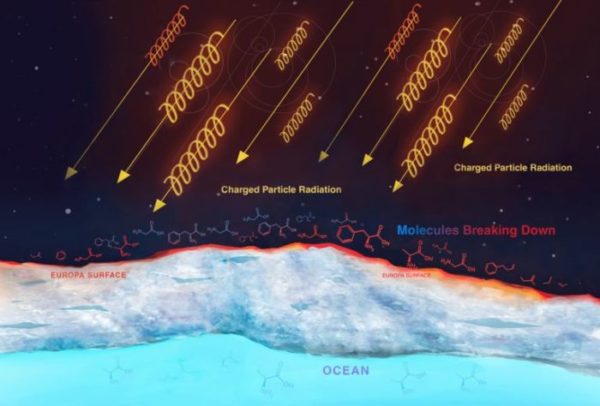 NASA’S search for extraterrestrial life involves trying to find the preconditions for life on places other than Earth. In our solar system, our best bets aren’t planets — they’re moons. Specifically the moons of Jupiter. In 2024 NASA will be seinding the Europa Clipper Mission to Jupiter to learn more about Europa. Here’s more from NeuroLogica:

In 2024 NASA will be sending the Europa Clipper mission to Jupiter. The craft will enter into an orbit around Jupiter designed to give it multiple close approaches to Europa. It is outfitted with a host of instruments to study the icy moon – a mass spectrometer to examine the constituents of the surface ice, a magnetometer, radar to probe the structures under the surface, and many others. The probe will arrive at Jupiter around 2030 so until then scientists are busy trying to learn as much about Europa as possible to make the best of the Clipper mission.

While the mission is not designed to directly detect life on Europa, it is designed to answer very specific questions about the plausibility of life. Being a frozen world distant from the sun (the sun’s light intensity is only 4% that of Earth’s), how could life evolve and survive? Beneath the icy shell of Europa is briny water, water mixed with minerals that is partially frozen but also liquid enough to have convection. Below the brine is a large liquid ocean, with more than twice the volume of water as in the oceans of Earth. Europa is not frozen solid (which it would be, given its size and distance from the sun) because of tidal forces from its massive parent, Jupiter. These tidal forces reshape Europa causing friction that heats the planet. Beneath the subsurface oceans scientists predict there are volcanoes on the sea floor.

Comments Off on NASA’s 2024 Mission to Europa #SpaceSaturday