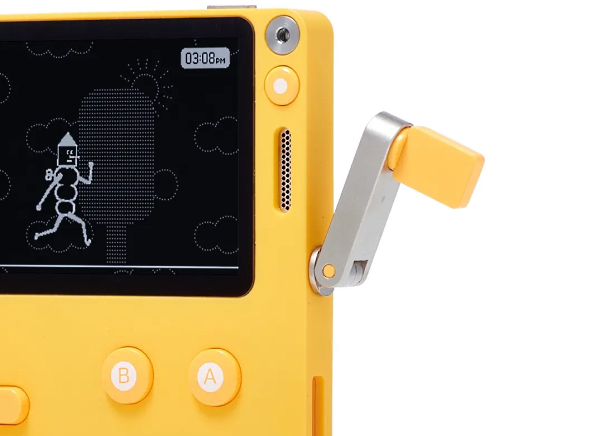 From nearly day one, Panic’s portable console has been defined by a single feature hanging off its right side. Since the introduction of portable gaming, each new handheld has been designed to stand out from the crowd — which has often meant more power, but also unique features that some might consider gimmicks.

Enter Playdate. Panic’s adorable yellow gaming device, originally announced in early 2019, has its feet planted firmly in both the past and the future. Though it has the appearance of a boxy Game Boy Pocket, the quirky handheld is designed to receive digital games weekly via Wi-Fi.

To understand where the crank came from, one first needs a crash course on how Playdate itself came to be. It all began 10 years ago, when Panic co-founder Cabel Sasser reached out to designer Jesper Kouthoofd of Teenage Engineering. A fan of Teenage Engineering’s stylish synthesizers, Sasser wanted to know if the small Stockholm-based electronics design team would be interested in teaming up for Panic’s upcoming 15-year anniversary. The plan was to “manufacture something incredibly special” for Panic’s most loyal customers. The connection was successful, but the product in question was still up for debate.

It wasn’t until Sasser discovered the existence of a super-reflective black-and-white LCD screen that he had an epiphany — why not make a handheld console? This was a big leap for Panic, a company known in tech circles for its intuitive file transfer and web development software, but Sasser and his team began to draw up plans for a simple prototype that could play games with pre-set visuals and limited movement à la the Game & Watch. “But it needed a ‘spark’, something special,” Sasser says.

Sasser was blown away. After forwarding the email to the rest of the Panic team, he shot off a quick response, now adamant the handheld had to be made.

I have notes and thoughts, of course, but this is immediately exciting.

And the crank. The crank. My God.

Read the entire story on Polygon.