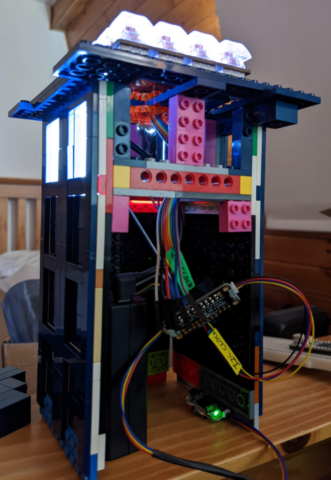 Last year, many Doctor Who fans embarked on a virtual treasure hunt in a bid to find Jodie Whittaker’s Time Lord. Fast forward to 2022, and maker Roberto Tyley has created a physical hunt – one in which his son, Alexander, was tasked with fixing the TARDIS by finding and entering a series of passphrases with the help of his friends.

The idea evolved over time, sparked by the cancellation of Roberto’s son’s seventh birthday party in 2020. The following year’s bash was held outdoors as a treasure hunt in the local park and the children had to find clues to unlock a LEGO combination safe. “My son loved it so much, he wanted another treasure hunt – but how was I going to top last year’s party?,” Roberto says.

His plan was to hide two screen-based devices in different areas of the park, each taking it in turns to generate passphrases which could then be entered into a treasure safe. By ensuring the devices couldn’t be moved once they were found, the children would need to split into three teams – two by the devices and one by the safe. They’d wait for the passphrases to appear, and co-ordinate the unlocking over their walkie-talkies.

The passphrase devices were made using a couple of Pico-Clock-Green LED-digit electronic clocks fitted with Raspberry Pi Pico boards and programmed so that they would display a series of words. Roberto ditched the safe, however, in favour of a TARDIS built out of LEGO, which he designed using Bricklink’s Studio 2.0.