This kit will get you going fast with Bluetooth Low Energy audio development with a lovely kit that has everything you need to build both basic and advanced BTLE audio demos that exercise all the new capabilities of BT 4.x and 5.x’s native audio streaming technology.

Audio was one of the first killer app’s for Bluetooth adoption. Who doesn’t remember when ubiquitous ‘hands-free’ headsets started popping up in every business guy’s ear. For mobile devices, these headsets turned out be quick to pair, and allowed people to talk, or listen to music, while driving or working without wires. 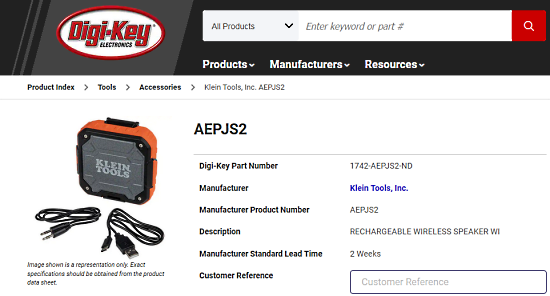 When the audio profile was first invented, there were a few, totally reasonable restrictions placed on how it was used. First, it’s a point-to-point connection – also called source-sink connection. There’s a supplier source of audio – say the MP3 player – and a destination sink like a speaker. Second, the compression codec had to match the processor and battery capabilities of late 90’s technology. The first classic codec was called SBC, although recently there are newer codecs that can do a better job with reducing lossyness and, of course, can take advantage of the Moore’s-law improvements in memory and processor capabilities. Unfortunately, as one can expect in such a technology space, many of the codecs are patented, licensed, and require per-device fees. Also, unless you know what to look for, it’s harder to compare two headsets with different codecs, as another variable that affects audio quality and delay.

While many non-audio/non-keyboard devices have thankfully moved from BT classic to BTLE, mostly in order to avoid Apple’s MFI program, there’s been a bit of a lag in getting audio devices to switch over from classic to LE due to the high inertia of technological laziness. 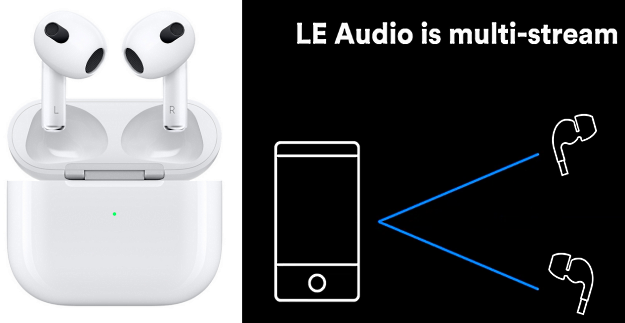 However, in the last few years, a Really Good Reason to move over has been invented: AirPods! Yep, when Apple came out with their new wireless Bluetooth earbuds, they had to come up with a custom BTLE protocol – because there’s two sinks and one source, and even if you created two connections (one for left and one for right) the source would have to work hard to synchronize audio. Sure Apple can put the time and money into that kind of development, but what about everyone else who wanted to make similar products?

That’s why when BTLE audio came ‘free’ with multi-point transmission and synchronization and an improved free codec, folks’ ears started perking up. 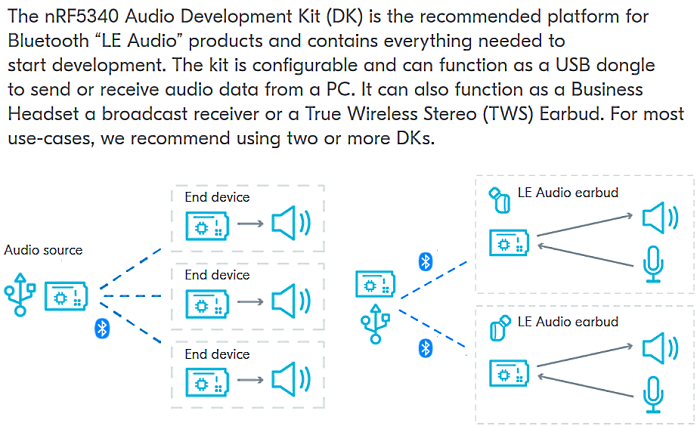 With Nordic’s new nRF5340 ADK, creating advanced BTLE Audio applications is super fast. The nRF5340 is a dual core ARM processor, which means it’s easy to have one core dedicated to codec management and DMA audio streaming, and the other core for interfacing and control. The free software examples come with two main demos right now: a synchronous example for making wireless earbuds, and a broadcast example for sending audio to multiple sinks. Note that for these examples you’ll often want two ADKs so you can stream audio to both ADKs as a way to mimic earbuds, for example. 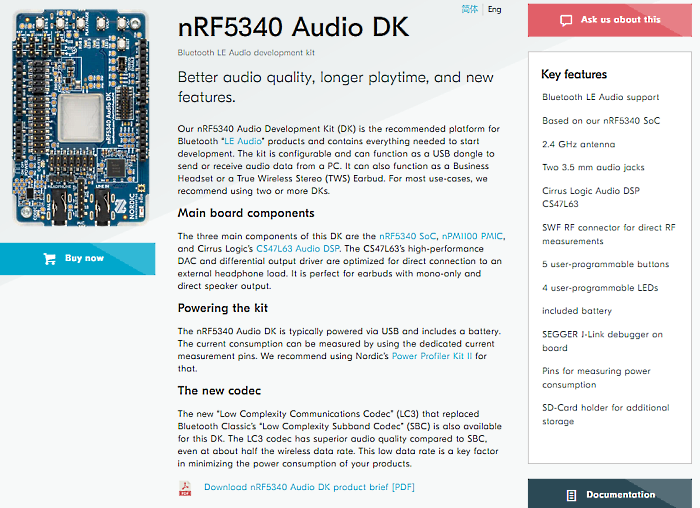 And, have you heard the good news? Digi-key has a TON of the nRF5340 Audio Development Kit in stock right now for immediate shipment. Each ADK has all the accessory hardware needed to immediately bootstrap your BTLE example project. (Hint, it’s also a great dev board for general nRF5340 development, with SD card, built in debugger, power management, Arduino-esque headers, RGB LEDs, and user interface buttons. Pick up two of these dev kits today and you can be jammin’ and boppin’ by tomorrow afternoon! 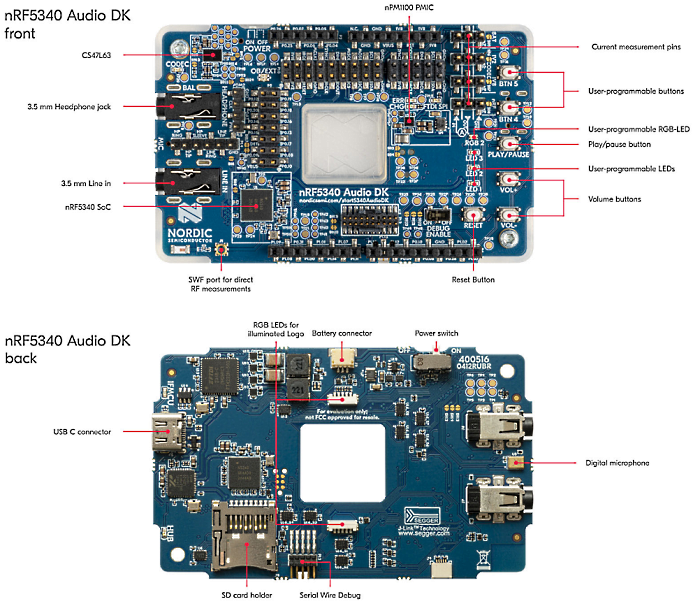