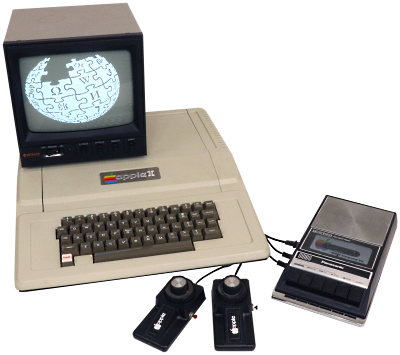 Andy McFadden found himself extracting software from Apple II cassette tapes purchased on eBay.  At the start of the project, he thought to myself, “it’s awkward to get at the data, but at least there’s no copy protection.”  As it turns out, he was wrong.

For many years, a war has been waged between those who publish software and those who don’t want to pay for it (or want to profit by selling illegal copies).  In recent years the war has expanded to video tapes, DVDs, and audio CDs.  Nobody believes that a copy-proof format is possible, but many publishers believe that they can increase their sales by discouraging illegal copies.

The copy protection techniques employed on Apple II 5.25″ diskettes are the stuff of legend.  The drive was completely under software control, requiring timing-critical loops to read and write data, so there were few limitations on what the copy protectors could do.  A scheme called Spiradisc, mentioned in Steven Levy’s book Hackers, wrote tracks in a spiral pattern.  The disc was essentially impossible to copy directly, though that couldn’t stop someone from cracking it.

Before the Apple II had floppy drives, however, it had an audio cassette interface for storing programs and data.  This was a very primitive system, requiring you to hook up a cassette recorder to your computer and fiddle with the volume knob until things started working.  To read data from tape, you specified a range of memory to fill, and hit the “play” button on your tape recorder.  If all went well, the computer cheerfully beeped at you and off you went.  Loading BASIC programs was even easier, because the start location was pre-determined, and the length was stored on the tape.  All you had to do was type “LOAD”.

Read how various cassette copy protection schemes were cracked in the article here.