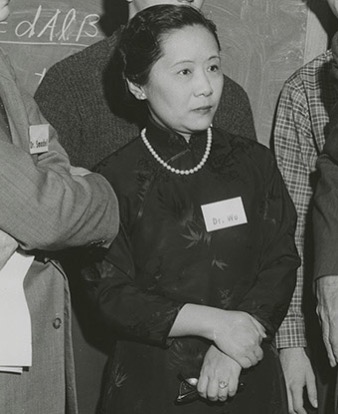 Chinese-born physicist Chien-Shiung Wu, Ph.D., was instrumental in the field of atomic science, she was an early advocate for women in STEM famously stating “I wonder whether the tiny atoms and nuclei, or the mathematical symbols, or the DNA molecules have any preference for either masculine or feminine treatment.”, via National Park Service

In 1934, Chien-Shiung graduated at the top of her class with a degree in physics from the National Central University in Nanking, China (now known as Nanjing University). After graduation, she worked in a physics lab in China. Her mentor, Dr. Jing-Wei Gu, another woman working in the field of physics, encouraged Chien-Shiung to continue her education in the United States.

With financial support from her uncle, Chien-Shiung took a ship to San Francisco. She was likely processed for immigration to the United States at the Angel Island Immigration Station located in San Francisco Bay.[1] She enrolled at the University of California Berkeley in 1936.[2] Her academic advisor was Ernest Lawrence. In 1939, while Chien-Shiung was still his student, he received the Nobel Prize in Physics for inventing the cyclotron particle accelerator. In 1940, Dr. Chien-Shiung Wu graduated with her PhD in physics.

In 1942, she married Luke Chia-Liu Yuan, who she had met during her studies at Berkeley. Neither of their families were able to attend the wedding because of World War II fighting in the Pacific. They moved to the east coast where Dr. Wu taught physics at Smith College in Northampton, Massachusetts and at Princeton University in New Jersey.[3] She was the first woman hired as faculty in the Physics Department at Princeton. Shortly afterwards, in 1944, Dr. Wu took a job at Columbia University in New York City, and joined the Manhattan Project. The Manhattan Project researchers were working towards the creation of the atomic bomb. Chein-Shiung’s research included improving Geiger counters for the detection of radiation and the enrichment of uranium in large quantities.

Filed under: holiday, Women In STEM —
Tags: women in STEM — by Jessie Mae