Swimming Pools in NYC: Then and Now 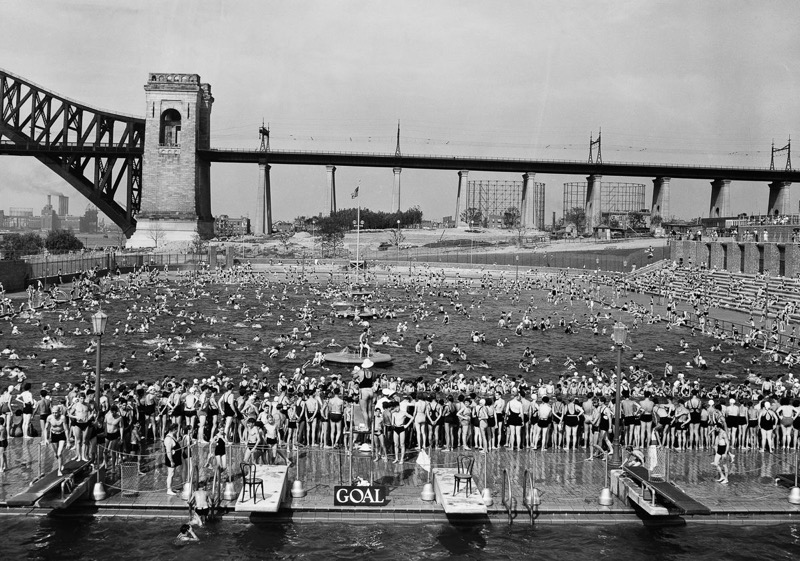 We have officially entered peak pool season here in NYC. School’s out, it’s hot as heck, and staying inside all day (and running up that AC bill) isn’t really an option.

I’m a huge fan of NYC public pools, which is why I was bummed to read about this year’s citywide (and really nationwide) lifeguard shortage. The shortage has so far impacted operating hours and capacity restrictions and, in some places, pools just aren’t open at all. While the city works on combating the shortage by raising the starting pay, many residents have been left out to dry, and are dreaming of happier summers gone by, when it was a little easier for New Yorkers to cool off from the notorious city heat.

Curbed recently published a guide to their favorite NYC pools. I was excited to see that the Astoria Pool made the list. It’s worth a visit for the view alone. I remember being completely in awe of the pool’s size when swimming there for the first time about a decade ago. My grandmother used to walk to the pool with her brothers in the 1930s over the Triborough bridge from the South Bronx. It was where she learned to swim. Also where she froze atop the infamous high-dive, holding up the long, rowdy crowd of people waiting their turn below. The Bowery Boys have a cool post on the history of the Astoria Pool, which you can read here.

Aside from their convenience and price-point, I think part of why I love swimming in NYC pools is that I feel part of a tradition. This feeling, a mix of nostalgia and sense of belonging, is especially prominent when visiting the older, WPA-Era pools, many of which were opened during the “summer of pools” in 1936. These pools were some of the most sophisticated in the country at the time — using cutting-edge filtrations systems and chlorine practices. Civil engineer and architect Aymar Embury II was the architectural and engineering lead on most of these projects. I’m shocked you don’t really hear much about Embury, when his legacy is all around us (Central Park Zoo, 1939 World’s Fair Pavilion, the Lincoln Tunnel, and hundreds and hundreds more – via the Kermit Project).

It was no doubt a transformative time for New York City. And, while the pools’ legacies on the whole are a positive example of a city project being built by and for its working class residents, like any story featuring Robert Moses, there’s a lot to unpack (for the short version, here’s a 2016 piece from the Wall Street Journal, for the long version, there’s always Robert Caro’s The Power Broker).

Even before the WPA-Era pools, NYC was home to many floating baths. It’s hard to imagine hoards of New Yorkers taking to the Hudson or East River for a swim, but it was quite popular during the late 1800s. NYC Parks has an impressively detailed history of the city’s pools you can check out here.

The depth of the water in the large well was 4 ½ feet and in the small one 2 ½ feet. There were 68 dressing rooms opening upon a small gangway around the edge of the well. They were open from late June or early July to early October. In 1911, 1,818,721 patrons used floating baths.

By the 1920s, environmental degradation of the city’s rivers tainted the floating bath experience, and the facilities were slowly taken out of commission. When Parks took over jurisdiction of Manhattan’s nine bathhouses in 1938 after the city charter was revised, the agency refurbished three of the last six remaining floating baths and docked them at 96th Street and the Hudson River; the baths only lasted a couple more years.

Here’s hoping the city pools can get back on track — and fast, so that all New Yorkers who wish can enjoy a well-deserved dip without sweating it out on a long line. And if you decide to brace the wait, don’t forget to bring your own lock!

Comments Off on Swimming Pools in NYC: Then and Now