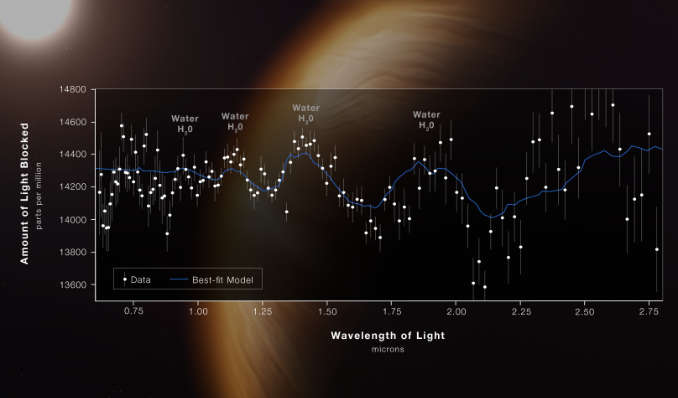 If the James Webb Space Telescope photos haven’t been boggling your mind, then it may be time to look at the images and have your mind boggled. We encourage you to look at these images on the highest resolution on the screen you have available. HD screens aren’t just for watching computer generated people flying around computer generated environments. Now you can use your HD screen to look at a square of space the size of a grain of sand, blown up so large you can see hundreds of galaxies spinning in a dance that has been roiling for billions of years.

But the JWST isn’t just for galactic titans. It’s also the most sophisticated spectrometer the world has ever known. And it’s found signs of water on exoplanets. Here’s more from Astronomy Now:

NASA’s James Webb Space Telescope has demonstrated its unprecedented ability to analyse the atmosphere of a planet more than 1,000 light-years away. With the combined forces of its 270-square-foot mirror, precision spectrographs, and sensitive detectors, Webb has – in a single observation – revealed the unambiguous signature of water, indications of haze, and evidence for clouds that were thought not to exist based on prior observations. The transmission spectrum of the hot gas giant WASP-96 b, made using Webb’s Near-Infrared Imager and Slitless Spectrograph, provides just a glimpse into the brilliant future of exoplanet research with Webb.

NASA’s James Webb Space Telescope has captured the distinct signature of water, along with evidence for clouds and haze, in the atmosphere surrounding a hot, puffy gas giant planet orbiting a distant Sun-like star.