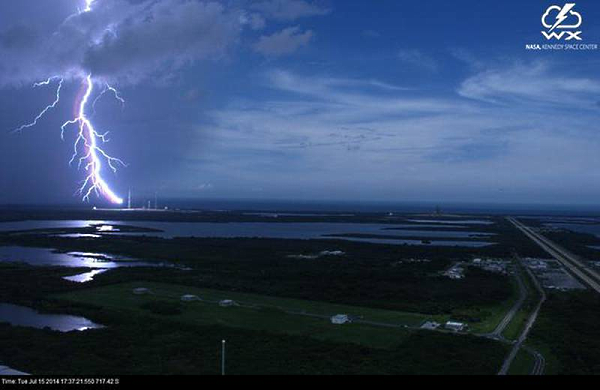 As NASA inches closer to a future return to the moon, its first leap toward its moonshot goal — Artemis I — is planned to launch during the peak of hurricane season and could face a gale of problems.

NASA is targeting three potential launch days from Aug. 29-Sept 5. from Kennedy Space Center. Those dates also happen to be within the first half of what meteorologists refer to as the peak of hurricane season, which typically sees more Atlantic tropical storm production from mid-August to mid-October.

Above, a lightning strike was recorded at Launch Complex 39-B at NASA’s Kennedy Space Center in Florida in July 2014. The event was captured by high-speed camera from the iconic Vehicle Assembly Building. At pad 39-B, there are three, 600-foot-tall masts with overhead wires used to transmit electrical energy around the perimeter of the pad to provide lightning protection for launch vehicles as they are processed and launched from the pad. (NASA)

In April, NASA faced a powerful lightning storm during an attempted wet dress rehearsal for Artemis, but delayed the test because of lighting striking the launch complex four times. At the time, Orion and the SLS core stage were powered up. Three of the strikes hit the launch pad’s “tower two” and weren’t of much consequence, but the fourth strike was a positive lightning strike — a rare and powerful lightning bolt — that hit pad 39-B’s “tower one” and activated the pad’s new lightning protection system.

“After more than 30 milliseconds, we still had almost 3,000 amps flowing through the ground,” said NASA’s Dr. Carlos Mata. “This particular event falls into that tiny percentage — less than 1% — that you just don’t expect to happen.”

See the video below and more in the Orlando Sentinel