The Vehicle Assembly Building (VAB) is a large building at NASA’s Kennedy Space Center (KSC) designed to assemble large pre-manufactured space vehicle components, such as the massive Saturn V and the Space Shuttle, and stack them vertically onto mobile launcher platforms used by NASA. The first Space Launch System (SLS) rocket was assembled inside in preparation for the Artemis 1 mission.

At 129,428,000 cubic feet, it is one of the largest buildings in the world by volume. The building is at Launch Complex 39 at KSC on Merritt Island on the Atlantic coast of Florida. It was built in 1963.

There are four entries to the bays located inside the building, which are the four largest doors in the world. Each door is 456 feet high, has seven vertical panels and four horizontal panels, and takes 45 minutes to completely open or close.

The building was declared a National Historic Civil Engineering Landmark in 2020.

There are four bays, originally built to be able to stack four rockets at the same time. The building was designed to be expandable to six bays. Currently the rear right bay is designated for stacking Artemis missions. Platforms at various heights can be brought in to service a rocket.

To find out more:

See the video below:

Your author, Anne Barela, works for Adafruit and participated in the NASA Social program for Artemis I and took pictures in this article. 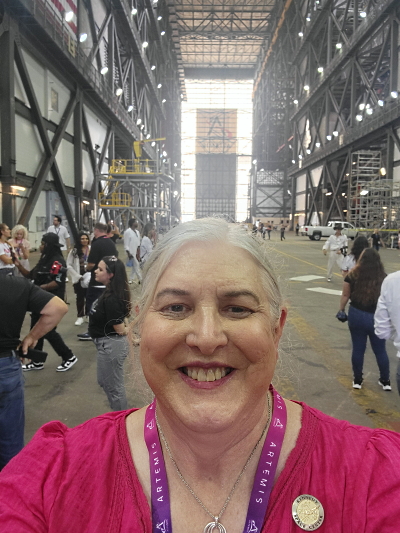