Rankin & Bass’s The Hobbit Revealed the Future of Pop Culture 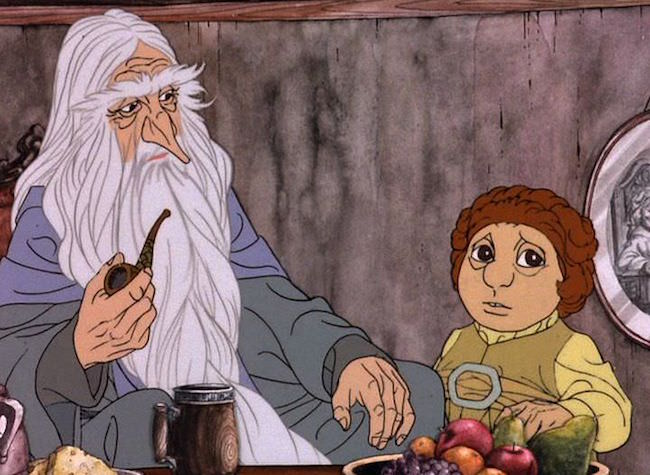 I really enjoyed this piece by Austin Gilkeson on Tor.com about how the late 1970s airing of Rankin & Bass’s The Hobbit foreshadowed so many of our most enduring pop culture mainstays (most prominently dragon fascination, Star Wars, and all things Tolkien). Gilkeson takes a close look at the movie and provides us with some great observations – including how Smaug looks straight out of a Studio Ghibli movie, which apparently is less surprising than you would think, because the Japanese studio that animated The Hobbit, became Studio Ghibli only a few years down the line.

As I watched The Hobbit, for the first time since elementary school, I tried to imagine what it would have been like to see the film when it first aired on television forty-five years ago. I picture a child sitting on a lime green couch in a wood-paneled basement, wearing a Darth Vader t-shirt she got after she fell in love with Star Wars (aka A New Hope, then still simply known as “Star Wars”) when it was released in theaters a few months earlier.

Our hypothetical child would have no idea that she was glimpsing, like a vision in Galadriel’s mirror, the future of pop culture. Forty years later, now perhaps with children the same age she was when she watched The Hobbit, our heroine would find that Star Wars still reigns at the box office, the most popular show on TV features dragons, and everywhere we look, humble heroes are set against dark lords: Kylo Ren, Thanos, Grindelwald, the Night King, and even The Hobbit’s own Necromancer.