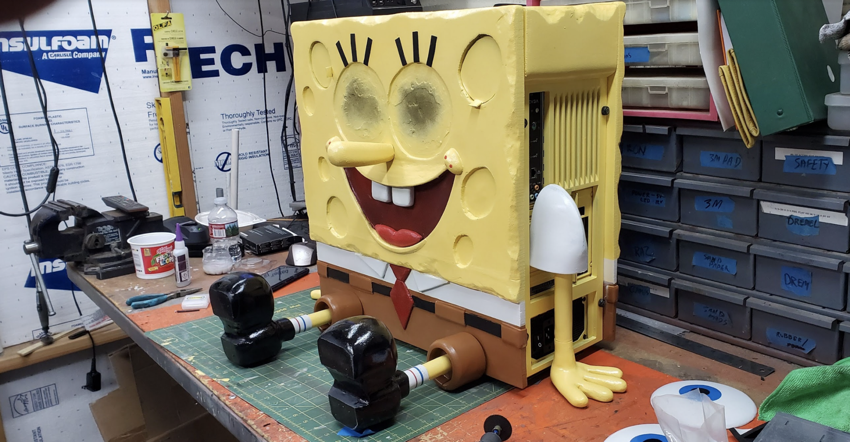 We’ve covered a SpongeBob sponge holder, a Potato Head Style Spongebob and even a Squidward Costume . Dewayne Carel built this SpongeBob Squarepants PC case with a ton of EVA foam and yellow paint!Interview via Raspberrypi.com

How did this SpongeBob project come about?

Dewayne: It was EVGA that wanted this project – the company wanted to do something special for one of its partners, Arabian Prince from the rap group NWA, who by the way is a huge SpongeBob fan. He even showed up to the unveiling of the case mod –not knowing what it was about or that it was for him – in SpongeBob shoes, pants and shirt.

How did you plan and design this build?

Dewayne: I looked at tonnes of images on the Internet of SpongeBob, and it became apparent that the EVGA DG-77 case I’d been given and SpongeBob were basically the same shape. Some would say ,‘Now that is good luck!’ Maybe, but I knew I had to create a case mod where people’s reactions wouldn’t be: ‘All you had to do was paint a case yellow’– yes, you know who you are. I needed to go to the next level to create a PC that didn’t look like it was a weekend project.

Once again, I headed off to the Internet in search of some inspirational images of SpongeBob. I was, of course, able to find an endless supply of images. This was great to get the colours and details needed – close-ups of his eyes, mouth, nose, shoes, and yes, his pants.

However, in most of the images, he was either standing or running, and I knew this wouldn’t work – how would I balance a fully loaded PC on toothpick legs without some sort of support? Then it hit me – he could be sitting down with his legs sticking straight out. With that vision in my mind, I quickly worked out the design with pencil and paper, which is my normal way of visualising my ideas. This plan was perfect – his feet would extend out and his arms would be to his side with his hands flat, making it look like he was sitting and holding himself up.

The face of SpongeBob was the make-or-break feature of the whole build. If it didn’t look like him then I might as well just scrap the whole case mod and save myself from the modding community’s comments. I spent many hours on the design – working out how big to make his eyes, for example, as well as the size of his mouth and how it curves – his smile is a main recognisable feature, and the bottom and top of his mouth protrudes out to form lips. I had to get his nose right too.