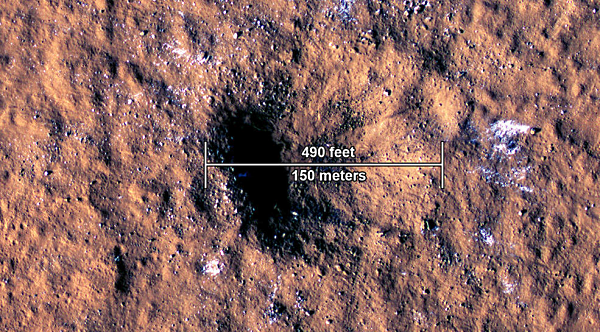 The NASA InSight lander felt the ground shake during the impact while cameras aboard the Mars Reconnaissance Orbiter spotted the yawning new crater from space.

NASA’s InSight lander recorded a magnitude 4 marsquake last Dec. 24, but scientists learned only later the cause of that quake: a meteoroid strike estimated to be one of the biggest seen on Mars since NASA began exploring the cosmos. What’s more, the meteoroid excavated boulder-size chunks of ice buried closer to the Martian equator than ever found before – a discovery with implications for NASA’s future plans to send astronauts to the Red Planet.

Scientists determined the quake resulted from a meteoroid impact when they looked at before-and-after images from NASA’s Mars Reconnaissance Orbiter (MRO) and spotted a new, yawning crater. Offering a rare opportunity to see how a large impact shook the ground on Mars, the event and its effects are detailed in two papers published Thursday, Oct. 27, in the journal Science.

The meteoroid is estimated to have spanned 16 to 39 feet (5 to 12 meters) – small enough that it would have burned up in Earth’s atmosphere, but not in Mars’ thin atmosphere, which is just 1% as dense as our planet’s. The impact, in a region called Amazonis Planitia, blasted a crater roughly 492 feet (150 meters) across and 70 feet (21 meters) deep. Some of the ejecta thrown by the impact flew as far as 23 miles (37 kilometers) away.

See 3D video of the impact below and more on NASA.gov.