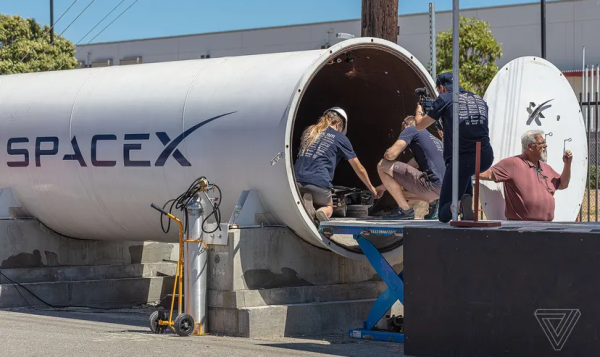 Elon Musk’s first prototype Hyperloop tunnel is no more. Bloomberg reports that the roughly one-mile-long white steel tunnel running along Jack Northrop Avenue near SpaceX headquarters in Hawthorne, California, has been removed and will be replaced with parking spaces for employees.

Perhaps you’ll recall that before Musk assumed the mantle of free speech champion, he set out to circumvent “soul-destroying traffic” by building the Hyperloop, a theoretical system of tunnels that would revolutionize transportation. He also claimed to be able to dig tunnels faster and more efficiently than most current tunnel boring systems, which he rightly argued were laborious and costly.

The above-ground tube was the centerpiece of a Hyperloop competition in 2018 when dozens of student teams from around the world gathered in the SpaceX parking lot to race their pods and celebrate all things Musk. There was another student competition the following year, and Musk predicted that a third race would feature a “10km vacuum tunnel with a curve.”

But in the last few years, Musk’s Hyperloop ambitions have been severely scaled back. His original proposal for an underground transit system, with magnetically levitating shuttles traveling through nearly airless tubes at speeds of up to hundreds of miles an hour, has been replaced with tunnels that can only accommodate Tesla vehicles. Other Hyperloop startups have shut down or pivoted to cargo shipments.

See more on The Verge.