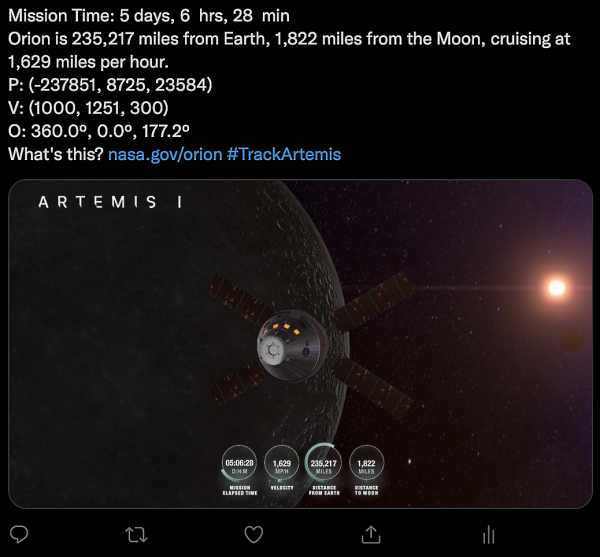 Join NASA’s Orion spacecraft on its first mission around the Moon using the Artemis Real-time Orbit Website (AROW) to track the spacecraft’s flight as it happens.

During Artemis I, Orion will travel to 40,000 miles beyond the Moon in the first integrated flight test with the Space Launch System (SLS) rocket. Using AROW, almost anyone with internet access can pinpoint where Orion is and track its distance from the Earth, distance from the Moon, mission duration, and more. AROW is available on NASA’s website (designed for desktop browers – may not work on all mobile devices) and on the @NASA_Orion Twitter account.

AROW visualizes data collected by sensors on Orion and sent to the Mission Control Center at NASA’s Johnson Space Center in Houston during its flight. It will provide periodic real-time data beginning about one minute after liftoff through separation of the SLS rocket’s Interim Cryogenic Propulsion Stage approximately two hours into flight. Once Orion is flying on its own, AROW will provide constant real-time information.

“This is a really powerful way to engage with the mission and understand the scope of what NASA is trying to accomplish with Artemis I,” said Seth Lambert, the Orion programmer who created AROW. 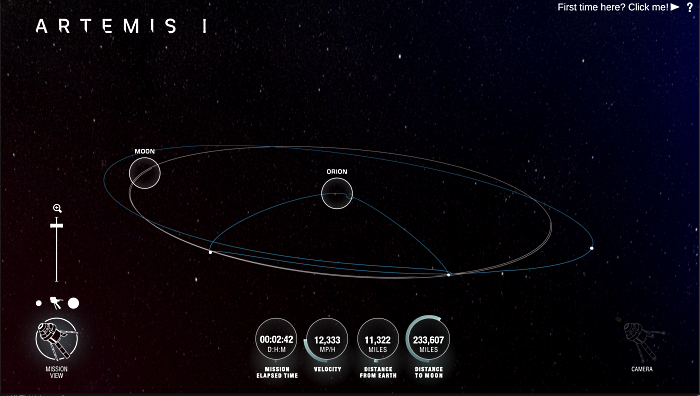 On the web, users can follow AROW to see where Orion is in relation to the Earth and the Moon and follow Orion’s path during the mission. Users can view key mission milestones, and characteristics on the Moon, including information about landing sites from the Apollo program. Also available for download will be trajectory data from the flight, called an ephemeris, found at the bottom of this page.